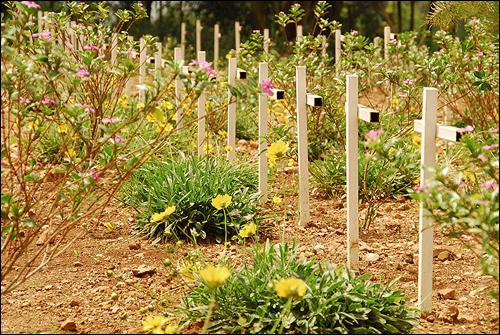 Kosovo…Rwanda… Srebrenica. These places will forever be associated with unspeakable, brutal acts of genocide and war crimes.

The global community has banded together to help prevent crimes like these and to bring to justice the perpetrators who commit them. The U.S. is part of this international effort—most recently through the creation of an interagency Atrocities Prevention Board. And the FBI supports the government’s efforts through its own Genocide War Crimes Program.


Today, in an effort to raise awareness about these crimes and the FBI’s part in helping to combat them, we’re announcing the launch of our Genocide War Crimes Program website. In addition to educating the public on our role, the website solicits information from victims and others about acts of genocide, war crimes, or related mass atrocities that can be submitted to us through tips.fbi.gov or by contacting an FBI field office or legal attaché office.

Why is the FBI involved, especially since these incidents primarily take place overseas? Take a look at the jurisdiction section of our new website, which explains the 1998 Presidential Executive Order 13107 and the four U.S. laws dealing with genocide, war crimes, torture, and recruitment or use of child soldiers.

In Their Own Words

“Rwandans saw accountability as the most important cornerstone to healing and continued progress.”

According to Special Agent Jeffrey VanNest, who heads up our Genocide War Crimes Unit (GWCU), our mission is to “systematically and methodically help track down perpetrators of genocide, war crimes, and other related atrocities—the worst of the worst—and apprehend them.”

These types of investigations are among the most complex ones we work. They typically involve piecing together fragmentary bits of information, interviewing overseas witnesses in conflict zones, collecting evidence in other countries, and accommodating language barriers. And the key to successfully conducting them—according to VanNest—is cooperation.

A Look Back: On the Ground in Kosovo

The FBI’s involvement in combating genocide and war crimes is nothing new. Back in 1999, the International Criminal Tribunal for the former Yugoslavia requested FBI forensic assistance after the indictment of former Yugoslavian president Slobodan Milosevic and four Serbian leaders for war crimes. Then-FBI Director Louis Freeh approved the deployment of a 65-person team to Kosovo, a small province between Macedonia and the Adriatic Sea, to work at what he called “the largest crime scene in history” (at that time). The team’s mission? To document and photograph crime scenes; locate, collect, and preserve evidence; and perform forensic exams on the deceased victims. Bureau investigators and forensic specialists ultimately exhumed bodies of 124 victims from 15 sites and processed six “killing” areas.

“The GWCU works shoulder-to-shoulder with our U.S. federal partners—most often with the Department of Homeland Security’s Immigration and Customs Enforcement (ICE)—to determine if there’s a violation of U.S law,” says VanNest. “If so, we envision working many of these cases jointly with our partners in ICE’s Homeland Security Investigations.”

Internationally—because the bulk of these investigations occur overseas—we work through our network of legal attachés who have established relationships in place with our counterparts in foreign nations and who coordinate our work with international criminal tribunals. We also cooperate with INTERPOL.

On the overview section of our new website, you can find out more about how we offer additional support to foreign authorities—such as crime scene preservation, interviewing techniques, age-enhancing photos, language services, and increasingly, victim/witness services—and who our primary domestic and international partners are.

Members of the GWCU, usually in conjunction with our ICE counterparts, coordinate our genocide/war crimes investigations. Collectively, GWCU agents and intelligence analysts in the unit are carefully selected for what they can bring to the table—subject matter expertise, interviewing skills, experience in past critical incident response, foreign language ability, and experience working with partner agencies in the U.S. and abroad.

“Our ultimate goal,” says VanNest, “is to ensure that perpetrators of these heinous crimes find no safe haven in the United States, or for that matter, no safe haven anywhere in the world.”