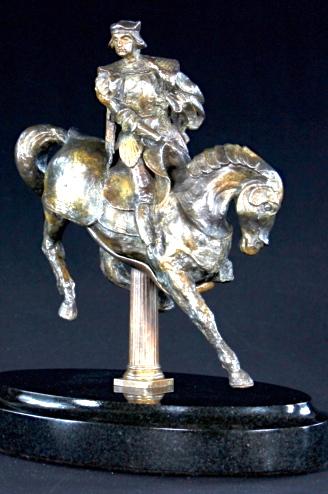 “Horse and Rider” to be Premiered in Beverly Hills

— A-once-in-a-lifetime find of a Leonardo da Vinci sculpture will be unveiled to the world at a private event at the historic Greystone Mansion in Beverly Hills California. Made from the mold of a beeswax statue dating back over 500 years, the sculpture has been authenticated to come from the hands of Renaissance Master, Leonardo da Vinci. Invited guests and select media outlets will get a firsthand view of the “Horse and Rider,” at an elegant courtyard cocktail reception. The reception will take place from 5pm to 8pm with a press preview from 3pm to 5pm. The Greystone Mansion is located at 905 Loma Vista Drive, Beverly Hills, CA 90210. This marks the first stop on a planned World Tour this fall to include London, New York, and Las Vegas.

For over 25 years, the owner has kept the irreplaceable mold safe and carefully pondered its future. He is now ready to share his masterpiece with the world and raise money to help people in need. Mold owner, businessman Richard A. Lewis, has joined forces with longtime Art Broker, Rod Maly and Certified Fine Art Appraiser, Brett Maly of Art encounter™ in Las Vegas to create an unprecedented limited edition offering of the sculpture to the public. Mr. Lewis has agreed to donate one million dollars to The Salvation Army based on sales of the edition.

The Provenance: Circa 1508, Leonardo sculpts a Renaissance figure in military regalia on a horse from a block of solid beeswax for his friend and benefactor, French military governor, Charles d’Amboise. The beeswax study was presumed to be a model for a larger, never-completed monument of the governor. After his death in 1519, Leonardo’s star pupil, Francesco Melzi, inherited the sculpture along with the rest of Leonardo’s effects. It is believed to have remained with his family, in Italy, until the 1930s when it was taken to Switzerland, for safekeeping, as war broke out.

Photos of the beeswax model appear in the Catalogue Raisonne of Leonardo’s drawings known as the Queen’s Collection at Windsor Castle, Horses and Other Animals. The beeswax model is also well documented in the scholarly work “Leonardo da Vinci: Scientist, Inventor, Artist” by Otto Letze and Thomas Buchsteiner. In “Leonardo: Discovering the Life of Leonardo da Vinci” French author Serge Bramly discusses the genius’s lifelong interest in horses and how they moved.

Fast forward to 1985, a group of businessmen traveling to Switzerland is shown the hand-carved sculpture in beeswax. Intrigued, they contacted the foremost authority on the life and works of Leonardo, Dr. Carlo Pedretti to authenticate the work. Following a thorough examination of the beeswax, on July 10, 1985, Prof. Pedretti proclaimed in writing, “In my opinion, this wax model is by Leonardo himself,” and dubbed the one-of-a-kind sculpture “Horse and Rider.”

Based on the authentication, they decided it was imperative to create a mold from the delicate wax sculpture to preserve the work and honor the artist’s intent.

Fascinated with the story and importance of the discovery, Mr. Lewis, engineer and real estate businessman, takes possession of the original mold of “Horse and Rider” in New York, along with all the supporting documentation. Twenty-five years later, the mold was restored and cast in bronze at one of the country’s oldest and most revered fine arts foundries, The American Fine Arts Foundry in Burbank, California.

In May 2012, upon examination of the bronze sculpture cast from the mold, Professor Pedretti exclaimed, “Perfect, perfect, perfect!”

About Art encounter™: Art Broker Rod Maly and Certified Fine Art Appraiser Brett Maly formed Art encounter™ in 1992. For more than 20 years, Art encounter™ has stood-out as Las Vegas’ best resource for fine art related services. Boasting on-site experts in art valuation, framing, and authentication, they have examined, appraised, and assisted with the purchase and sale of artworks by some of the most prominent artists of the last 150 years, including Picasso, Renoir, Cezanne, and Toulouse-Lautrec.

About Richard A. Lewis, Owner of the Original Leonardo Mold: A successful businessman with a background in engineering, Mr. Lewis had long known about the many inventions and prophetic scientific achievements of Leonardo da Vinci. However, it wasn’t until the 1980s, when an opportunity to own something derived from the hands of Leonardo presented itself, that he fell in love with the “Horse and Rider” sculpture.

About Professor Carlo Pedretti: Regarded as the world’s leading authority on Leonardo da Vinci, Pedretti is an esteemed Professor Emeritus of Art History, the Chair of Leonardo Studies at UCLA, and has authored more than 50 books and at least 700 scholarly articles and essays on the life and works of Leonardo da Vinci.

About the Collection: Each casting of “Horse and Rider” is derived from a mold taken from a beeswax sculpture, hand-carved by Leonardo da Vinci over 500 years ago. The limited run of bronze castings are being offered in four distinct patinas, each carefully selected to faithfully honor Leonardo’s vision. The sculptures, with base, measure approximately 12″ long, 12″ high and 7″ wide–identical to Leonardo’s beeswax original–and weigh roughly 18 pounds.