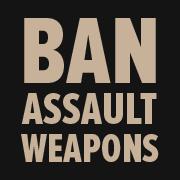 The shock and trauma from the images and stories from Aurora are still very much with us, and it is impossible to put into words the pain being felt by families and friends of the victims.

But that doesn’t mean we shouldn’t speak out. In the wake of this massacre, it’s time to put aside politics and reinstate the federal ban on assault weapons.

After the news broke last Friday, President Barack Obama said that “there are going to be other days for politics, this I think is a day for prayer and reflection.” Governor Mitt Romney said, “I stand before you today not as a man running for office, but as a father and grandfather, a husband, and American.”1 Both of their campaigns asked networks to pull their negative advertisements.


The gestures from the two men who are running for President were welcome steps. But, we need more than sympathetic words. We need real leadership to start to address the senseless gun violence that holds our communities hostage.

One of the principal weapons used by the shooter in the horrific Aurora massacre was an AR-15 assault rifle.2 This weapon features a magazine that holds 100 rounds of bullets, and its trigger is capable of firing 50-60 rounds per minute.3

CREDO members worked to pass the federal assault weapons ban in 1994. And we fought to stop its expiration in 2004. And we continue to advocate for a federal ban on assault weapons like the AR-15 used in the Aurora massacre.

Massacres on the scale of the tragedy in Aurora happen in part because our federal gun laws make it easy for civilians to obtain military-level firepower. We need to pass and enforce sensible federal gun laws restricting ready access for civilians to assault weapons. Reinstating a strong version of the federal ban on assault weapons known as the Violent Crime Control and Law Enforcement Act is where we should start.

We’re not so naïve as to think that sensible gun laws are all that’s needed to stop the killings. There are many things that need to change in American culture to stop the next Aurora-like massacre. But we do know, one thing we should put at the top of the list — keeping military-level assault weapons like the AR-15 with a high capacity clip out of the hands of civilians.

Thank you for speaking out.

3. Caroline Hedley, “It Was Shockingly Easy For The Batman Shooter To Buy A Massive Arsenal,” BusinessInsider.com, July 21, 2012.