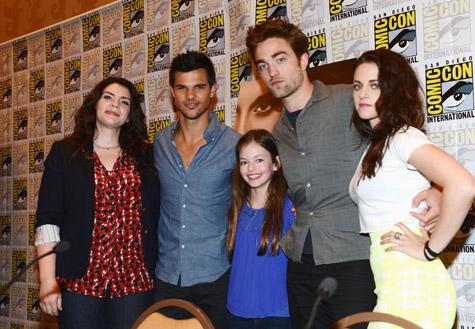 Following a night of camping out in the mild San Diego night where they met, took pictures with and received autographs from the Breaking Dawn cast, Twihards packed Hall H en masse to bid their beloved franchise farewell. Well, at least farewell from Comic-Con.

Before launching into Q&A, we saw new footage from the upcoming second part of Breaking Dawn, including the first seven minutes of the movie.

Director Bill Condon introduced the first clip which picks up right where Breaking Dawn – Part 1 left off. The seven minute clip is essentially about Bella realizing her new powers now that she’s become a vampire. As she and Robert Pattinson’s Edward mumble about being the same temperature and loving each other, a dangerous realization crosses their minds. Bella needs to feed.

What follows is an extended race through the forest culminating in Bella stalking a fawn grazing on some leaves. Her attention is diverted as she sees a rock climber who has slipped and scraped his knee. The fresh blood entices Bella who races up the side of a large cliff with Edward in pursuit trying to stop her. He succeeds and the pair return their attention to the fawn.

The problem with that however, is that a mountain lion is also stalking the fawn and in perhaps one of the most unbelievable pieces of CGI ever witnessed, Kristin Stewart leaps off a rock just in time to tackle the mountain lion as it leaps in for the kill.

The clip culminates with Edward and Bella meeting Taylor Lautner’s Jacob, some banter about Bella looking the same and Jacob’s werewolf stench and fade scene on Stewart’s line to Jacob, “You want to meet Renesmee?”

Another clip featured the Cullen coven instructing Bella on how to appear human in advance of her meeting with her father, Charlie. The clip served to try and show off the film and Stewart’s comedic side. Twihards loved it, the rest of Hall H, not so much.

The panel wasn’t all goodbyes and bittersweet nostalgia. As had been rumored a few days leading up to the Twilight panel, Meyer surprised the Hall H crowd by introducing new never-before-seen footage from The Host, another film adaptation from a book she authored.

The intent was pretty obvious here – hook the Twilight crowd onto Meyer’s sci-fi thriller so that when The Host hits theaters on March 29 next year, it’ll do Twilight-esque numbers at the box office.

Footage shown introduced us to the main players – Saoirse Ronan as Melanie Stryder/Wanderer and Diane Kruger as The Seeker. Essentially, Ronan’s Stryder has been infected with an alien parasitic soul called The Wanderer. There were also a few chase sequences and a confrontation between Jake Abel’s Ian O’Shea and Max Irons’ Jared Howe inside an underground bunker. William Hurt also makes an appearance firing off a shotgun to break up the skirmish.

Twihards were enthusiastic about the film. Granted the genre is completely different from the romantic melodrama of the Twilight saga. The panel concluded with members of covens around the world taking the stage in an Avengers-esque moment where everyone posed for pictures.