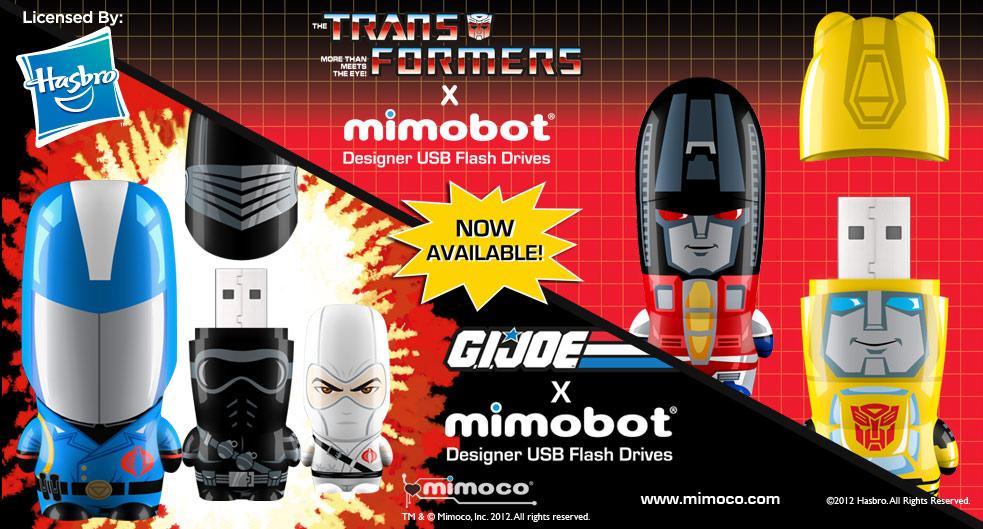 Featuring SNAKE EYES, COBRA COMMANDER, STORM SHADOW, BUMBLEBEE, and STARSCREAM in up to 64GBs of memory!

Featuring SNAKE EYES, COBRA COMMANDER, STORM SHADOW, BUMBLEBEE, and STARSCREAM in up to 64GBs of memory!

“We’ve been working with Hasbro on this particular set of 80’s re-imagination for some time and we hope others respond to its ‘Rad Factor’ as much as we do. The power of the 80s just can’t be denied… this one amazing era produced so much that still thrives today…and right at the top of the list for us are G.I. JOE and TRANSFORMERS,” says Mimoco’s Director of Media & Licensing, Scott Seraydarian. “But in spite of all the reboots that have been coming out recently, we felt that the 80’s classics still weren’t getting the love they so richly deserve. Following Mimoco’s core philosophy of “Refresh your Memory”, we set out to change that. “Refreshing Your Memory” is the collision of what’s known and what’s new… something familiar, yet fresh. These traits are embodied perfectly in this series.”

SNAKE EYES MIMOBOT® – SNAKE EYES is the code name of one of the original and most mysterious members of the G.I. JOE team. A deadly master of multiple martial arts, little is known about his past, but with his trademark black ninja body suit, and face-masking visor, SNAKE EYES MIMOBOT will guard your documents, music, pics, and data with the speed and agility of a real ninja master. He’ll never let your data fall into the hands of his archenemy STORM SHADOW or the treacherous clutches of COBRA COMMANDER!

STORM SHADOW MIMOBOT® – This ninja bodyguard of COBRA COMMANDER is not only a formidable martial artist but the ultimate rival of STORM SHADOW. Dressed in his white ninja bodysuit and balaclava, and armed with his longbow, and samurai sword, STORM SHADOW MIMOBOT is ready to store and transport your data with stealth cunning!

COBRA COMMANDER MIMOBOT® – The leader and founder of terrorist organization, COBRA, COBRA COMMANDER wants nothing more than total control of the world. With his trademark blue uniform and COBRA insignia, plumb the depths of his villainous madness by removing the COBRA COMMANDER MIMOBOT’s helmet to reveal his diabolical blue eyes. He will stop at nothing in his quest for total domination; he needs only to gain access to your data, documents, music, and pictures for the world to crumble under his iron fist!

In addition to battling over control of their precious ENERGON Cubes, STARSCREAM MIMOBOT and BUMBLEBEE MIMOBOT fight over something even more valuable: your digital data! With his F-15 wings folded behind him, STARSCREAM MIMOBOT captures the DECEPTICON arrogance and power with a smirk all-knowing, and all-evil. You know he’s out to control the universe when you see the DECEPTICON logo emblazoned on his tail fins.

He might succeed in his quest for total domination of your data files, too, if it wasn’t for BUMBLEBEE MIMOBOT. Bright yellow and sporting wheels that are ready to rrrroll-out!, BUMBLEBEE MIMOBOT is as loyal a sidekick as anyone could hope for, and loyalty is what you need when you’re relying on a friend to store and transport all your important docs, pics and music!

The new Hasbro X MIMOBOT collections are now available online at www.mimoco.com, in select retail shops worldwide, and for a first look at Mimoco’s booth (#4938) at San Diego Comic-Con.

Boston-based design house Mimoco® fuses the art of contemporary characters with the functionality of personal data storage devices and is well known in both the pop-culture driven Art Toy underground and the high-tech electronic world. The MIMOBOT® and MIMOMICRO™ USB flash drive and card reader lines include original characters and licenses from Star Wars™, Hello Kitty®, TRANSFORMERS®, and DC Comics®, to pop-artists like tokidoki®, David Horvath, and FriendsWithYou. MIMOBOT USB flash drives are available in up to 64GB capacities, are Mac and Windows compatible, and include preloaded bonus Mimory™ content. Learn more at www.mimoco.com.

(NASDAQ: HAS) is a branded play company providing children and families around the world with a wide-range of immersive entertainment offerings based on the Company’s world class brand portfolio. From toys and games, to television programming, motion pictures, digital gaming and a comprehensive licensing program, Hasbro strives to delight its global customers with well-known and beloved brands such as TRANSFORMERS, LITTLEST PET SHOP, NERF, PLAYSKOOL, MY LITTLE PONY, G.I. JOE, MAGIC: THE GATHERING and MONOPOLY. The Company’s Hasbro Studios develops and produces television programming for markets around the world. The Hub TV Network is part of a multi-platform joint venture between Hasbro and Discovery Communications (NASDAQ: DISCA, DISCB, DISCK), in the U.S. Through the company’s deep commitment to corporate social responsibility, including philanthropy, Hasbro is helping to build a safe and sustainable world for future generations and to positively impact the lives of millions of children and families every year. It has been recognized for its efforts by being named one of the “World’s Most Ethical Companies” and is ranked as one of Corporate Responsibility Magazine’s “100 Best Corporate Citizens.”Learn more at www.hasbro.com.