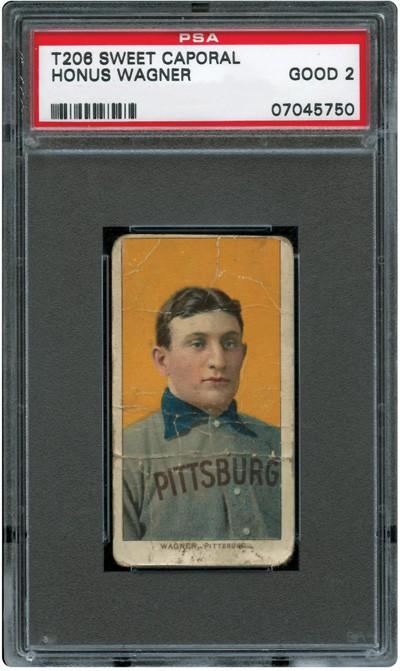 Memory Lane Inc., which specializes in rare sports cards, is offering an authentic example of the famed T206 Honus Wagner card in its newly launched ‘Holy Grail Auction’.  Graded “2” or “Good” by Professional Sports Authenticator (PSA), the card is among the better known examples of the undisputed key to the set issued through American Tobacco Company products from 1909-1911.  It has been in the possession of a prominent east coast collector for many years and was recently consigned to the Tustin-based auction company.

The card’s opening bid of $550,000—the highest in sports collecting history—has already been made.  With the company’s 19% buyer’s premium, the actual bid stands at a remarkable $654,000 with bidding not scheduled to end until May 5.  The current bid has already smashed the record for a Wagner card in this condition.  The card that brought $1.2 million on Thursday ranks just one grade higher than the one being sold by Memory Lane.

The legend behind the Wagner card is that the Pittsburgh Pirates’ star shortstop asked for American Tobacco to pull his card from production in the spring of 1909.  Some speculate he did it because he abhorred smoking.  Others say he didn’t want children to have to buy tobacco to acquire his card while another faction believes it was simply a dispute over compensation for the use of his picture.  Whatever the reason, early card collectors quickly recognized its scarcity and the legend has only grown greater over time.

With less than 100, and perhaps as few as 60 examples known to have survived spring cleaning rituals and wartime paper drives, the T206 Wagner card has proven to be a shrewd investment in addition to being a highly prized collectible.   In 2006, Memory Lane sold another PSA 2 Wagner for $294,338, less than half of the current bid on the card currently being offered.  Just 12 years ago, a “Very Good” condition Wagner sold for what now looks like a bargain basement price of $145,000.

In addition to its supreme rarity, the majority of the surviving Wagner cards have graded “poor” or simply been designated as “authentic” because of numerous severe flaws, even trimming in some cases.  The PSA 2 Wagner Memory Lane is offering exhibits some creasing and corner wear, but ranks among the more respectable cards of its kind ever to come to auction.

In addition to the Wagner card, Memory Lane is also offering a T206 Eddie Plank, one of the other three ultra-scarce cards from that series.  It’s expected to sell for a six figure sum.

To register or receive a free catalog with hundreds of other auction items from the 19th century to the present day, call (877) 606-LANE (5263) or visit the company’s website (http://www.memorylaneinc.com).