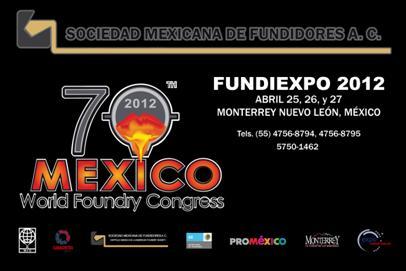 Ultraseal International, the global leader in solutions to the eternal problem of porosity in castings, is to exhibit at Fundiexpo 2012, the 70th World Foundry Congress at Monterrey, Mexico from April 23rd to 27th.

The company will share Stand 117 with the UK Foundry Equipment and Suppliers’ Association (FESA) where it will be promoting the advantages of its world-beating recyclable sealant Rexeal 100.

Ultraseal International, which has a worldwide operation with its headquarters based at Coventry, UK, was the first to introduce the world to recyclable impregnation sealants and remains at the forefront of the impregnation technology today.

Its latest breakthrough is a totally closed-loop, virtually effluent-free impregnation system that can be operated continuously around the clock with minimal production line down time and even without connection to a mains sewer.

This builds on Ultraseal International’s previous achievement of recycling up to 90% of the sealant from the initial stage of the impregnation process, which would otherwise by washed away in a traditional process.

The closed loop system also recycles the water from the final, hot cure, stage of the process using Ultraseal’s innovative Water Recycling System. The system is less expensive to run than a conventional system and is kinder to the environment. It uses less sealant, less water and produces far less effluent.

Gary Lloyd, Managing Director of Ultraseal International, said: “As environmental legislation becomes increasingly stringent around the world, it is more important than ever before for companies to consider the impact their activities have on the environment.

“Ultraseal is continually striving to find impregnation processes which are less polluting, more energy-efficient and less wasteful of natural resources for our customers.

“The closed loop impregnation system is an exciting development that will save customers both time and money, while permanently solving the problem of porosity in castings.”

Recognised as the global leader in providing impregnation equipment and sealants, Ultraseal International has forged a reputation for innovation and excellence throughout its 45-year history.

Research and development is carried out at its headquarters in Coventry, UK, and the company has operations in the United States, Japan, China and India, with a further 20 agents/distributors around the world, including South America.