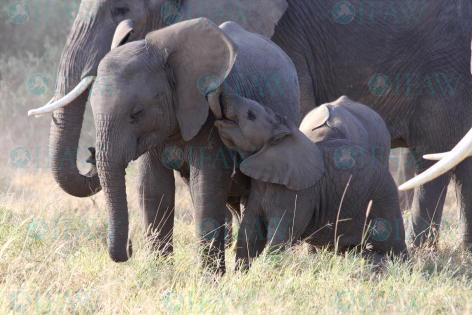 The illegal ivory trade starts with the slaughter of elephants, continues with wildlife traffickers smuggling ivory across international borders and ends with the under-the-counter sale of carvings, signature stamps and trinkets, in marketplaces in Asia and online.

The International Fund for Animal Welfare is working to cut the supply chain at all its major touch points by training rangers in anti-poaching techniques, lobbying politicians to take action to block the sale of ivory, collaborating with customs and law enforcement authorities to arrest black-market sellers and reducing consumer demand through out the world, especially China, one of the largest consumers of wildlife products including ivory.

In mid-February, we learned that poachers from Sudan in Central Africa wereslaughtering elephants by the hundreds in Cameroon’s Bouba Njida National Park. Yet, officials in the Cameroon government, who were aware of the poaching, were sitting on their hands.

International Fund for Animal Welfare Director France and Francophone Africa, Céline Sissler-Bienvenu with the body of an elephant slaughtered for its ivory in Cameroon in recent weeks.

In early March, Céline Sissler-Bienvenu and Julie Landry, from our French office, flew into Cameroon with a French TV crew to investigate and conduct an aerial survey. Céline and Julie also sat down with the Minister of Forests and Wildlife and his counterpart in Defence and urged them to act quickly. With IFAW’s focusing the world’s spotlight on them, the government was finally forced into action.

Three hundred soldiers, a helicopter and three ultra-light aircraft from the national army entered Bouba Ndjida to stop the massacre. The poachers may have fled the park. We don’t know for sure because of the park’s size.

Almost 300 elephant carcasses have been counted in the aerial survey. The numbers of dead elephants may be significantly higher. Villagers in the area reported that poachers claimed to have killed 650 elephants.

With the slaughter in Cameroon as a backdrop, last week, INTERPOL, with funding from IFAW, tackled the illegal trade of ivory and rhino horn with the largest-ever African wildlife crime operation in 14 countries in East, West and Southern Africa.

Code-named, Operation WORTHY, initial reports indicated this crackdown resulted in arrests of several dozen people and the recovery of more than 250 kg of raw ivory, lion and leopard pelts, python and crocodile skins and live birds. Illegal firearms and other contraband were also seized.

Work on the front lines of illegal trade is essential to protecting wildlife, but IFAW understands we can never protect wildlife everywhere unless we reduce consumer demand for those products. IFAW’s Asia office has worked for years to reduce demand for wildlife products in China.

International Fund for Animal Welfare Director France and Francophone Africa, Céline Sissler-Bienvenu with the body of an elephant slaughtered for its ivory in Cameroon in recent weeks.The Chinese “Mom, I got teeth” campaign creative.

Recently, in an interview with National Public Radio, Grace Ge Gabriel, Director of IFAW Asia, pointed out that IFAW monitors found there were many suspected illegal ivory listings on Baidu.com, one of China’s largest search engines. I am glad to report to you that based on information supplied by IFAW, Baidu is investigating and removing postings of illegal wildlife products.

Baidu shut down 13 forums engaging in the illegal trade of ivory, tiger bone, rhino horn, sea tortoise shell, and other derivatives and in live animals. Baidu also wiped 11 forums clean of any discussion related to banned species. In all, Baidu deleted 34,685 postings and is working with IFAW to find other ways to combat illegal online wildlife trade.

China is one of the largest consumers of wildlife products and an IFAW study found that 70 percent of Chinese consumers did not know that elephants were killed for ivory. Some thought elephants may lose tusks like people lose teeth. In Chinese, “ivory” means “elephant tooth.”

These adverts are just one aspect of our ivory demand reduction work in China, but they have been extremely effective. They have been displayed in subways, airports and other high traffic areas. And now, they are included in a curriculum on animal welfare education. In June 2011, they were used by Zhejiang Education Bureau in the Chinese language portion of the National College Entrance Exams, which in that province was taken by nearly 300,000 students this past June. Now, every one of those 300,000 exam takers in Zhejiang understands the connection between ivory trade and the killing of elephants. If the ads become adopted in the college exams across the country, we could reach more than 9 million high-school graduates each year.

Take action now and add your name to IFAW’s Say ‘NO!’ to ivory petition by clicking here.