The “Bridesmaids” to Present at 84th Academy AwardsÂ® 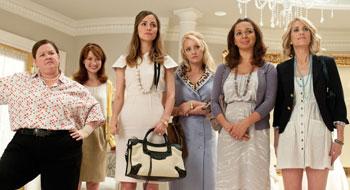 Academy Awards for outstanding film achievements of 2011 will be presented on Sunday, February 26, at the Kodak Theatre at Hollywood & Highland Center®, and televised live by the ABC Television Network. The Oscar presentation also will be televised live in more than 225 countries worldwide.

The Academy of Motion Picture Arts and Sciences is the world’s preeminent movie-related organization, with a membership of more than 6,000 of the most accomplished men and women working in cinema. In addition to the annual Academy Awards – in which the members vote to select the nominees and winners – the Academy presents a diverse year-round slate of public programs, exhibitions and events; provides financial support to a wide range of other movie-related organizations and endeavors; acts as a neutral advocate in the advancement of motion picture technology; and, through its Margaret Herrick Library and Academy Film Archive, collects, preserves, restores and provides access to movies and items related to their history. Through these and other activities the Academy serves students, historians, the entertainment industry and people everywhere who love movies.

Additional information about the Academy of Motion Picture Arts and Sciences and the Academy Foundation may be found at http://www.oscars.org

“Oscar®,” “Oscars®,” “Academy Awards®,” “Academy Award®,” “A.M.P.A.S. ®” and “Oscar Night®” are the trademarks, and the ©Oscar® statuette is the registered design mark and copyrighted property, of the Academy of Motion Picture Arts and Sciences.