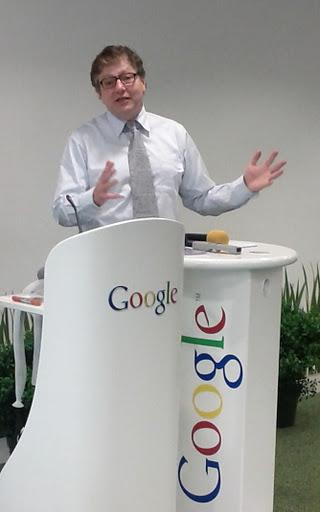 Last November, we announced our support for a new Data Journalism competition, organized by the Global Editors Network. The competition is now open to submissions and today we hosted an event at our offices in London to share details on how to compete and win a total of six prizes worth EUR 45,000. The European Journalism Centre is running the contest and Google is sponsoring.

ournalism is going through an exciting—if sometimes wrenching—transition from off to online. Google is keen to help. We see exciting possibilities of leveraging data to produce award-winning journalism. “Data journalism is a new, exciting part of the media industry, with at present only a small number of practitioners,” said Peter Barron, Google’s Director of External Relations. “We hope to see the number grow.”

In data journalism, reporters leverage numerical data and databases to gather, organize and produce news. Bertrand Pecquerie, the Global Editor Network’s CEO, believes the use of data will, in particular, revolutionize investigative reporting. “We are convinced that there is a bright future for journalism,” he said at the London event.

“This is not just about developing new hardware like tablets. It is above all about producing exciting new content.”

The European Journalism Centre, a non-profit based in Maastricht, has been running data training workshops for several years. It is producing the Data Journalism Awards website and administering the prize. “This new initiative should help convince editors around the world that data journalism is not a crazy idea, but a viable part of the industry,” says Wilfried Ruetten, Director of the center.

Projects should be submitted to http://www.datajournalismawards.org.

The deadline is April 10, 2012. Entries should have been published or aired between April 11, 2011 and April 10, 2012. Media companies, non-profit organisations, freelancers and individuals are eligible.

Submissions are welcomed in three categories: data-driven investigative journalism, data-driven applications and data visualisation and storytelling. National and international projects will be judged separately from local and regional ones.


“We wanted to encourage not only the New York Times’s of the world to participate, but media outlets of all sizes,” says Pecquerie. “Journalism students are also invited to enter, provided their work has been published.”

An all-star jury has been assembled of journalists from prestigious international media companies including the New York Times, the Guardian and Les Echos. Paul Steiger, the former editor-in-chief of the Wall Street Journal and founder of the Pulitzer Prize-winning ProPublica, will serve as president.

Winners will be announced at the Global News Network’s World Summit in Paris on May 31, 2012.