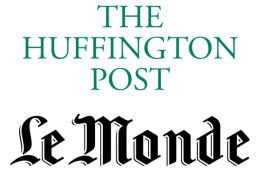 Le Huffington Post will combine the local editorial resources of Le Monde, one of France’s leading and most widely respected dailies, with The Huffington Post’s pioneering combination of original reporting; aggregation; a leading-edge commenting forum and dynamic social engagement tools; and a vibrant platform for a wide range of bloggers. LNEI will contribute original editorial content through its network of journalists and bloggers. M Publicite, part of The Le Monde group, will partner on the site’s advertising. Each of the three partners will be shareholders in Le Huffington Post.

The Huffington Post is part of The Huffington Post Media Group, a leading source of news, opinion, entertainment, community and digital information comprised of 56 destination websites, including The Huffington Post, Moviefone, Engadget, TechCrunch, Patch, StyleList, and MapQuest. The Group’s diverse network of sites combine journalism, technology, engagement, and video to reach a global audience on every platform. The Group has over 20,000 bloggers — from politicians and celebrities to academics and policy experts — who contribute in real-time on a wide-range of topics making news today. Among them are Nora Ephron, Larry Page, Bill Maher, Robert Redford, Madonna, Alec Baldwin, Scarlett Johansson, Russell Simmons, Bill Gates, and Charlie Rose. The Huffington Post has 37 million unique visitors a month, per comScore. The Huffington Post UK and The Huffington Post Canada both launched this year.

Les Nouvelles Editions Independantes is the holding company of Matthieu Pigasse, which controls the French cultural weekly magazine and Les Inrockuptibles group, which has a co-controlling stake in Le Monde Group jointly with Pierre Berge and Xavier Niel, and which also holds various stakes in the French media landscape.

Le Monde is a French daily evening newspaper owned by La Vie-Le Monde Group and edited in Paris. Widely considered France’s newspaper of record, Le Monde was founded in 1944 by Hubert Beuve-Mery, at the request of General Charles de Gaulle, in order to restore integrity to a French press tainted by Nazi collaboration during the occupation.