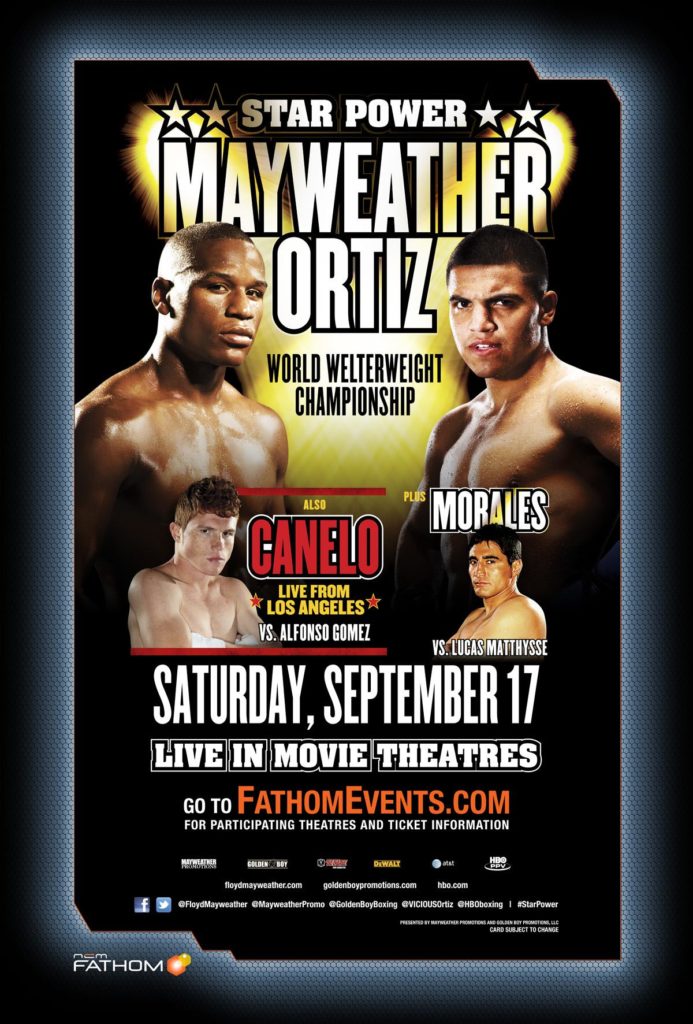 Tickets for Star Power: Mayweather vs. Ortiz Fight Live are available at participating theater box offices and online at www.FathomEvents.com.  For a complete list of theater locations and prices, visit the NCM Fathom website (theaters and participants are subject to change).

“If there’s one thing people know about me, it’s how much I enjoy performing on a big stage and in this case, the big screen,” said Mayweather. “Fans in the theaters can expect a great night of boxing from me and the rest of the stars on the show that night, but I have no doubt that my star will shine the brightest.“

Mayweather (41-0, 25 KO’s) remains boxing’s biggest attraction, wowing crowds and generating record pay-per-view numbers each time he steps into the ring.  In his last ring appearance on May 1, 2010, Mayweather dismantled Sugar Shane Mosley in a lopsided unanimous decision victory.  Mayweather is no stranger to fighting on Mexican Independence Day weekend, as prior to his sensational win over Mosley, he took on Mexican boxing star Juan Manuel Marquez on September 19, 2009, beating his opponent in spectacular fashion.  During his extraordinary career, he has amassed wins over world champions such as Diego Corrales, Jose Luis Castillo, Arturo Gatti, Zab Judah, Oscar de la Hoya and Ricky Hatton.

“Watching the fight on the big screen in movie theaters across the country is a fantastic way to experience a mega-fight like Mayweather vs. Ortiz, Canelo vs. Gomez and Morales vs. Matthysse, all on Mexican Independence Day weekend,” said Richard Schaefer, CEO Golden Boy Promotions. “It is great to work with NCM Fathom again to bring championship boxing to the big screen in an unparalleled level of entertainment.”

Victor Ortiz (29-2-2, 22 KO’s) is on fire.  He is riding a six-fight undefeated streak including his sensational title capturing win over Andre Berto on April 16, 2011.  The hard-punching southpaw proved himself throughout their 12-round battle when he survived a knock down in the sixth round and came back to drop Berto at the end of the same round in one of the most exciting boxing fights this year.  Ortiz, who was already known as one of the most powerful young fighters in the sport, but was questioned in the past for his desire, showed the world that his heart matches his hands of steel when faced with the best in boxing.

“Since boxing made its exciting return to movie theaters in 2009, Fathom has allowed fans to experience every punch and jab at their local movie theaters,” said Dan Diamond, vice president of Fathom. “This big screen fight brings Mayweather back to the ring in what promises to be one of boxing’s most memorable matches of 2011.”

Already Mexico’s brightest young star, 21-year-old Alvarez (37-0-1, 27 KO’s) of Guadalajara is quickly becoming an international sensation with fans around the world taking noting of his power and prowess in the ring and his charm and charisma outside of the ring.  Following wins over former World Champions Carlos Baldomir and Lovemore N’Dou in 2010, Alvarez kicked off 2011 with a March victory over Matthew Hatton that earned him the WBC super welterweight world championship.  Three months later, Alvarez returned to Guadalajara for a homecoming title defense and victory over Ryan Rhodes that captivated a nation.

A fan favorite who was present in American living rooms every week when he competed on “The Contender” reality show, Alfonso Gomez (23-4-2, 12 KO’s) has proven that he has what it takes to battle it out with the elite in the years since his stint on national television.  The owner of wins over Arturo Gatti, Ben Tackie, and Jesse Brinkley, the 30-year old Los Angeles resident (who originally hails from Guadalajara) has also faced current WBA Super Welterweight World Champion Miguel Cotto and Peter Manfredo Jr., but he is currently showing the best form of his 10-year career thanks to a five-fight winning streak that includes victories over Jesus Soto Karass and Jose Luis Castillo.

A three-division world champion and future Hall of Famer, Erik “El Terrible” Morales (51-7, 35 KO’s) ruled the boxing landscape for years, thrilling fans with his classic battles against Manny Pacquiao, Marco Antonio Barrera, Paulie Ayala, Wayne McCullough and In-Jin Chi. But when he returned from a nearly three-year layoff in 2010, many wondered if the Tijuana native still had what it took to compete with the elite.  Those questions were answered loud and clear with a three fight winning streak in 2010 and a Fight of the Year candidate in April of 2011, when he went to war for 12 rounds with Marcos Maidana before losing a razor-thin majority decision. Now, the 34-year old warrior is back in the ring and back in Las Vegas to face the concussive punching Matthysse as he vies to become the only Mexican fighter in history to win world titles in four weight divisions.

One of boxing’s hardest punchers, Lucas Matthysse (28-2, 26 KO’s) of Trelew, Argentina has made former World Champions Zab “Super” Judah and Devon Alexander see stars in his last two fights, knocking each of them down, only to lose both fights by controversial split decisions.  The 28-year-old’s new role as the people’s champion is a good one for the crowd-pleasing standout, who has been delivering stellar performances from the time he turned professional in 2004.  A former WBO Latino and WBO Intercontinental champion who counts “Vicious” Vivian Harris, DeMarcus “Chop Chop” Corley and Rogelio Castaneda Jr. among his vanquished foes, Matthysse, who has won 93 percent of his fights by way of knockout,  is amped up and ready to trade blows with one of the sport’s modern greats, Erik Morales, on September 17.