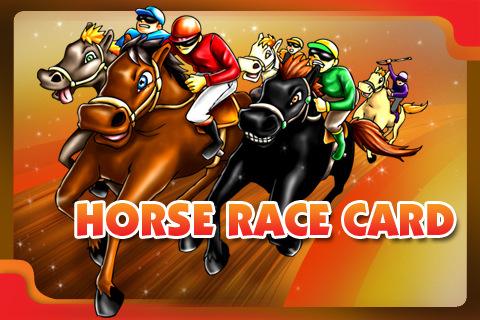 Horse Race Card was created by Ricky Ahluwalia (during June 2011).  The game is in the form of PLAYCARDS or an APPLICATION (available on iPhone/iPad App store, Blackberry, Android, etc). Distributors are invited to share it’s success!

Horse Race Card (www.HorseRaceCard.com) is a distinct game that is expected to have high volume of sales worldwide.  It’s iPhone/iPad/iPod version is available at iTunes App, while it’s Blackberry & Android version is under construction.

The Playcards is being looked forward to be distributed worldwide.  Dedicated distributors are being invited to join the Horse Race Card family to enjoy the coming success together.  Unlike other products that share a minimum percentage to  be forwarded to the distributor and the retailer, CV.Unlimited Satisfaction is looking to create a loyal and healthy business environment globally, by sharing profits with distributors and retailers that is several times the percentage compared to other products.  High volume sales expected globally, as unlike other games, with Horse Race Card the player will always need more cards, as this game is disposable (one card per play).

Worth playing, and great opportunity for distributor success! Visit: www.HorseRaceCard.com

About the Creator / Founder;

Ricky Ahluwalia, was born in Jakarta – Indonesia, on the 13th day of March in the year of our lord nineteen hundred seventy six.  Married since 2006, Ricky is blessed as a father of two.

Ricky started attending college at an early age of 14, in the United States.  During at Goldenwest College – Huntington Beach (www.goldenwestcollege.edu), he held several positions to effect a positive change toward society as a whole.  Positions held included; President of International Business Club, Senator of the Student Body, CalSACC Rep, and contributed as a campaign force to the 45th Congressional District candidate elect.  Discovering his own potentials at an early age, he decided to take a further challenge…

Next, Ricky was enrolled at the University of Southern California – Los Angeles (www.usc.edu), where he achieved his B.Sc, PPMT (a combination degree in: Administration, Psychology, and Political Science).  Ricky was much thankful to the educational standards that USC provided him with, and felt much obliged toward USC.  Thus, he contributed by finalizing a project on behalf of USC in retrieving funds from the local Govt to implement facilities in financially unstable lower grade schools in Los Angeles (www.usc.edu/uscnews/stories/2971.html).  After graduating from USC in 1998, Ricky returned to Jakarta, Indonesia.

Ricky who by this time has discovered his entrepreneurship abilities, with the help of his highly respected father “Kukuh Ahluwalia” together set up self owned branded fashion retail stores in Jakarta, Indonesia.  He played the role as the strategic planner, and succeeded in the creation and development of several brands that are exclusively sold in the stores.  His strength grew further when joined by his brother “Harnish Ahluwalia,” who in 2005 returned from Australia after completing University. As the stores grew in number, they called it “FASHIONMART Group.”  By 2011, the self owned branded fashion retail stores called “FASHIONMART Group” grew into interest for many other investors in their country.  Thus, “FASHIONMART Group” decided to share their success and guided investors to open the prototyped stores in other cities within Indonesia, where they were given exclusive distribution and sales rights.

During June of 2011, Ricky created a distinct concept of game, which he then titled “Horse Race Card.”  The vision expected is a global boost in sales volume, as the game concept is one that has never been founded before.  The game is in the form of Playcards or an application that can be downloaded on iPhone, iPad, Blackberry, Android, etc.  Together with his brother “Harnish Ahluwalia” (Co Founder of Horse Race Card), Ricky established CV. Unlimited Satisfaction.

Ricky Ahluwalia: “I assure you an uncomparable success with the distribution gains of Horse Race Playcards, share the growth experince hand-in-hand together as winners!”