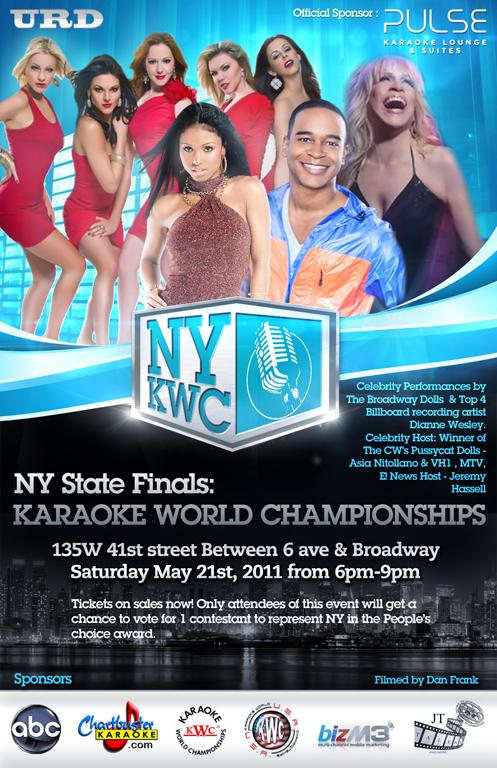 For one night only, see New Yorkâ€™s most talented karaoke singers take the stage and compete for the right to represent New York on ABCâ€™s new reality TV show- Karaoke Battle USA, scheduled to begin airing later this fall.

On May 21st, 2011 at 6pm-9pm, be prepared for a night of celebrity judges and performances by The Broadway Dolls-  cast members from Mamma Mia, Hairspray, Chicago, Wicked, Memphis, Wonderland, etc. and Dianne Wesley- Top 4 Billboard recording artist.

This star-studded event will be hosted by Asia Nitollano (Winner of The CW’s Pussycat Dolls Present: The Search for the Next Doll) and Jeremy Hassell (TBS, Billboard UK VH1, MTV, E! news, and WCBS 880 News) hosted by Pulse Karaoke Lounge at the Arena event space on 135 W 41st Street between 6th Ave. and Broadway.

ABCâ€™s televised show will broadcast the selected male and female contestants to represent the best amateur singers from the United States. They will be competing against other national winners on an international platform in Kilarney, Ireland. Attendees of this event can vote via text message for a winner to advance as the Peopleâ€™s Choice Winner. (Details to be announced during the event.)

â€œAs the largest worldwide amateur singing contest, the Karaoke World Championship brings new notoriety to the art of Karaoke and a fresh perspective to singing competitions currently seen on television,â€ says Shawn Goh, producer and director at Pulse Karaoke Lounge. â€œIt is truly exciting to have the opportunity to host this event right here in the heart of Broadway.â€

Tickets are on sale now! (Link)

Pulse Karaoke Lounge will open their doors to members of the press interested in covering this event, and provide access to the competitors and organizers for interviews, as well as still and video photography upon request. For more details, please contact info@pulsekaraoke.com or call 212-278-0900.

Top winners at the national level will receive a slate of prizes valued at over $4,000, including studio recording time,  custom song demos to help them further their singing careers, and round-trip air fare and hotel accommodations in Kilarney, Ireland for the international competition.

The Karaoke World Championships USA is the only competition in the United States granted an exclusive license by the international karaoke authority. The top talent in the nation will compete at the national competition, following the completion of the state and regional finals.