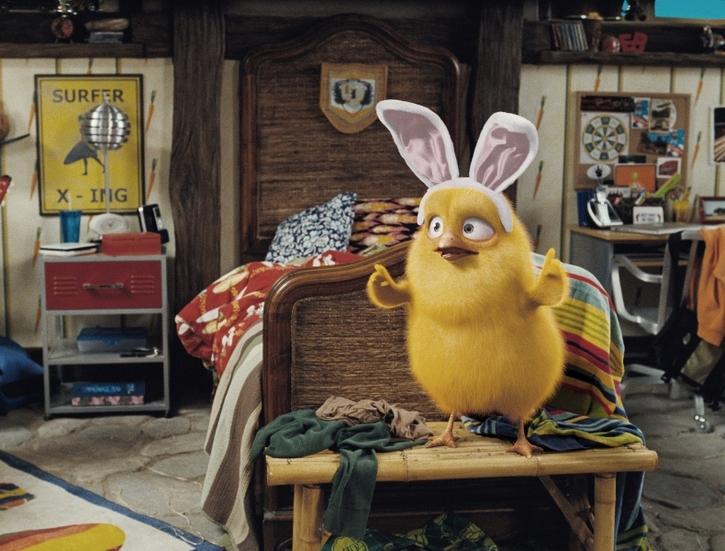 Topping the weekend, Hop hatched an estimated $38.1 million on approximately 4,700 screens at 3,579 locations, narrowly edging out Rango to claim the highest-grossing opening weekend of 2011 so far (if the estimate holds). It was also a larger start than G-Force and Beverly Hills Chihuahua but below the two Alvin and the Chipmunks movies among similar titles. Easter comes late this year (April 24), so Hop is well-positioned to play well all month.

In second, Source Code generated an estimated $15.1 million on close to 3,400 screens at 2,961 locations. That was ho-hum compared to the starts for its fellow sci-fi thrillers currently in theaters, Limitless and The Adjustment Bureau. Distributor Summit Entertainment’s exit polling indicated that 54 percent of the audience was male (whereas Adjustment Bureau and Limitless skewed female) and 64 percent was aged 30 years and older.

Insidious debuted in third with an estimated $13.5 million at 2,408 locations, which may be a solid showing for the inaugural release of distributor FilmDistrict but was below average for a supernatural horror movie.

As well as the three new nationwide releases may have done individually, collectively they couldn’t match the three debuts on the same weekend last year (Clash of the Titans, Why Did I Get Married Too? and The Last Song), leading a 28 percent drop in overall business versus last year. The weekend was also below par for April kick-offs in general.

Sucker Punch bled 68 percent to an estimated $6.1 million for a $29.9 million sum in ten days. The drop was about as severe as Zack Snyder’s last live-action movie, Watchmen, but with only a fraction of the gross. It was also worse than the more comparably-grossing Kick-Ass, which was off 53 percent in its second weekend last spring.

The Lincoln Lawyer saw the smallest decline among nationwide releases, slowing 34 percent to an estimated $7.1 million for a $39.6 million tally in 17 days. Limitless also hung in there with an estimated $9.4 million, down 38 percent for a $55.6 million total in 17 days. It’s on the verge of surpassing The Adjustment Bureau, despite having a smaller start.

Rango seemed to feel the brunt of Hop and took its steepest hit yet. Off 53 percent, the animated Western comedy wrangeld an estimated $4.6 million for a $113.8 million sum in 31 days.

Meanwhile, few cared about to see the king’s cursing censored. The King’s Speech (PG-13) mustered a mere estimated $1.2 million at 1,011 locations, down from the original’s $1.6 million haul last weekend, despite a new marketing push. This affirmed that no one weas clamoring for a modified version of the movie, especially at this point when the movie’s word-of-mouth and Oscar momentum have died down.