Whoâ€™s on your Nascar pit crew ? 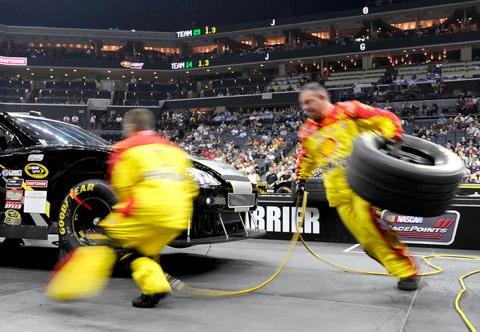 When you’re watching a Nascar pit crew, what do you notice? Everyone in the pit crew specializes in one task and they’re good at it. Real good at it, right? Whether it’s replacing a tire, filling up fuel, or talking strategy with the driver, every job within the pit crew is important.

Just like how each driver in Nascar has their own pit crew, you too need your own crew. Obviously they won’t be in charge of replacing your tires, but they will be in charge of helping you either make money or save it when it comes to your business.

Over the last 9 years I have found myself going back to the same crew no matter what business I am working on. So in that spirit, here are the 11 crew members I always use:

The more money you make, the more likely you are to get sued. If you haven’t been sued yet, you may think you’re lucky, but in reality it means that you left way too much money on the table.

Every time someone threatens to sue me or wants to get into litigation, I always call Frank. He is like a pit bull and when someone messes with you all you have to do is let him loose and he’ll take care of the rest.

When someone threatens to sue you, it’s very rare it goes to court. In most cases, it actually goes to mediation, which means that not only do you need to hire a lawyer like Frank, but you’ll also need to hire a neutral third party to help settle your dispute.

Every time I need a neutral third party, I call Ben. He isn’t on your side, but unlike most mediators he won’t beat around the bush. He’ll try to get you a settlement as quick as possible.

And although the fees starts adding up to be paying your lawyer as well as a mediator like Ben, they’ll both save you a lot more money than taken your dispute to court.

For some odd reason, I have really bad luck when it comes to government audits. Lately it seems like I have been on a roll and each year the government audits either one of my companies or myself.

When you get audited, you could hire a tax attorney and start spending 500 plus dollars an hour or you can hire Andy who has a much more reasonable rate. He’s a CPA like most accounts, but the one card that he has tucked under his sleeve is that he used to be an auditor for the government.

So not only does he know how to deal with auditors, but he’ll do everything in his power to make sure you pay the least amount of money to the government without breaking any laws.

Luckily for me, although I have been audited multiple times, I have never had to pay the government any extra money because of Andy.

The reason 50% of small businesses fail is because they don’t have enough capital. One way you can solve this is by raising either some seed money or venture capital.

No matter how much capital you raise, legal bills for fund raising are typically high. Most lawyers charge anywhere from $20,000 to $30,000 to do all of your legal paper work when it comes to fund raising. And to top it off, you usually have to pay your investor’s legal bill as well, which means you can easily spend $60,000 when fund raising.

The great part about Joey is that he’s a really good and scrappy attorney that can help close both a small or large funding amounts for a reasonable fee. He is actually so reasonable with his rates that even venture capital funds use him so their portfolio companies won’t get stuck with huge legal bills.

I know, I’ve already mentioned 3 attorneys in this blog post, but the one that I tend to use the most happens to be Bill Bromfield. He’s a partner at Fenwick and West and he happens to be the attorney I trust with everything.

From legal contracts to personal issues, I can always count on Bill to help me out. The best part about him is that although he is at a big law firm, he doesn’t charge you for small things like phone calls that most attorneys would charge you for.

Anytime I have a legal issue, I always call Bill. I don’t care that he is based in Seattle and most of my business is done outside of that region… hands down Bill has protected me from more lawsuits and helped me with more legal contracts that any other attorney out there.

Although I have the privilege of working with a few awesome designers who are team members, sadly there is just way too much design work for internal team members to complete.

Anytime I need a website designed I always call up one guy… Chuck Longanecker. He always takes care of all of my website and blog design needs in a timely fashion, which is rare for designers.

Not only does he do great work, but he is reasonably priced, which is rare for designers who work with people like Tim Ferris and Seth Godin.

Not only has Andrew helped the who’s who of the web 2.0 world, but he is great at making applications user friendly.

From Gary Vaynerchuck to Kevin Rose… anytime someone needs a web application designed, they turn to Andrew.

If you don’t believe that Andrew is a rock star, just look at who David Heinemeier Hansson (creator of Ruby on Rails) uses for his design needs.

I’ve been in the SEO world for almost 10 years now and although some say I am a great SEO, they’ve actually got it wrong. I used to be a great SEO, but now I am just a business guy who closes deals.

After being in the SEO realm for a few years, I taught my cousin everything that I know. And over the years he has come to surpass me in SEO knowledge and expertise. Anytime I need SEO work done at an affordable rate, I turn to Sujan. He is quick, cheap, and provides results.

Anytime one of my companies needs some SEO, social media marketing, or pay-per-click help, I always turn to one person… Dave Snyder. And more importantly, I turn to the company he co-founded, Blueglass.

Because they have a large team of talented marketers, they are able to take on large projects and actually deliver. They provide great results and I haven’t been able to find one company or person who can build more natural incoming links and traffic into my website than Blueglass.

The best part about dealing with them is that you don’t have to babysit them like you would with most consulting companies. They just get the job done!

Although I technically lose money from blogging, for some reason or another I always end up spending money on my blog. From modifying plugins to tweaking the design there is one guy who I can count on helping me out without screwing things up.

Jay is a WordPress ninja and probably the most affordable guy on this list. He just takes care of all of your WordPress needs without you having to check if he did a good job and if your blog works in all browsers.

The cool part about Jay is that he works around the clock, so when I need things done late at night he gets it done so that way I can test things out during non-peak hours.

Although I am the co-founder of two startups that help you make more money from your web-based business, I just don’t always have the time to maximize my conversions.

So when I need someone to just come in, improve my conversions from a copy and designs perspective, I just call Ben. By no means is he cheap, but his rate is far under what increases in revenue he’ll bring you each and every month.

The best part about Ben is that he’ll treat your website like his own. He’ll make sure that whatever he does is truly in best interest of your company and if he can’t make you thousands if not millions of dollars in extra revenue, he won’t take on the project.

Hopefully, knowing who is in my business pit crew will help you grow your business like it has helped me with mine. The only thing I ask is that you don’t try to haggle with any of my crew members.

I personally pay each of them and although some of them cost me an arm and a leg I’ve always found that they make me more money than what I pay them.

At that the end of the day some of these guys will cost you 6 figures a year, but I’ll bet you that they’ll make you at least double what you are spending with them.

And if you don’t believe in paying high priced service providers, one thing that I’ve learned, the hard way, is that you really do get what you pay for. I have tried hiring low priced people like lawyers and marketers and the results they provide aren’t really worth it. Don’t make that mistake!

by Neil Patel. Neil is the co-founder of 2 Internet companies: Crazy Egg and KISSmetrics.