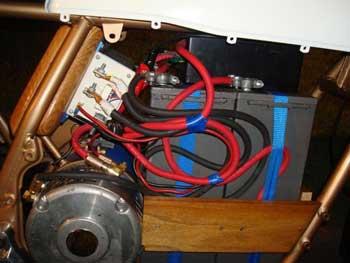 A while back, I asked how long it would be before motorcycles ran without gas. After all, everyone’s talking about reducing their carbon footprint these days. Electric car motors are going mainstream, and it’s only a matter of time before bike engines go the same way, right? But even if electric bikes do become the new standard (personally, I’m holding out hope for an internal combustion miracle-technology) there’ll always be a place for the classics.

Still, wouldn’t it be nice if you could have your cake and eat it too?

Well, with a little ingenuity and a lot of patience, you can. Just ask Fayetteville, Arkanas’ Julian Santa-Rita. He’s an avid rider and a long-time Old Bike Barn customer who found his latest project bike—a 1978 Honda CB 750—going to rust in someone’s yard. Restoring a bike like that is project enough for many old bike fanatics, but Santa Rita had bigger plans. He wanted to completely convert the bike to electric power!

Needless to say, this wasn’t a weekend project. It took a while for Santa-Rita to restore his find to the point where he could even start the conversion. He found a lot of the parts he needed (handlebars, mirror, tires, brake pads, brake lines, rear shocks and a few other things) at OBB, and that’s when I first heard about his project.

Once he got the bike restored, it took months of research to find suppliers for all the parts he needed for the motor. And after all that, he still had to build it. But in the end, his hard work paid off. For around $2000—less than a quarter of the cost of commercially available electric bikes—he’s got himself a smooth, quiet ride that can do 55 and carries enough of a charge to get him to and from work.

Not bad for an information technology specialist with a degree in painting.

Which brings me to my point: one of the things that got me hooked on old bikes all those years ago (besides that they were cheaper than hot rods), was that I knew I could learn to fix them myself. Today’s vehicles might be cleaner and greener, but they’re a lot more complicated too. That means it’s harder to get into the DIY spirit that makes owning a bike so rewarding.

So when a guy who’s not an engineer, or even a mechanic, but just an interested wrencher like the rest of us converts a classic ride to electric on his own, in his garage, it’s the kind of thing that makes me sit up and take notice. I’m glad that OBB could be a part of it. Were here for all bikers, no matter what’s making their engines run.

‘Til next time, keep it between the ditches and shiny side up.