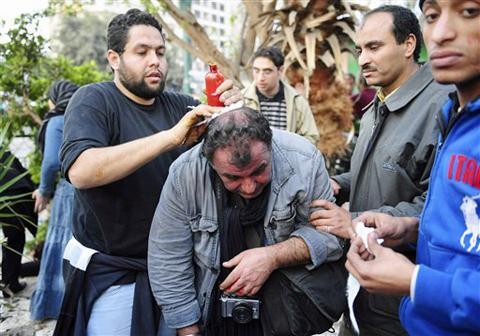 Journalists covering the protests in Egypt have been detained by security forces and attacked by supporters of President Hosni Mubarak in the capital, Cairo.

Reporters say they have been targeted by angry supporters of Egyptian President Hosni Mubarak who view the news media as sympathetic to anti-government demonstrators.

“People who were very angry and were waving their fists at us and were cursing at us,” he said. “One person who was there, a bystander, said that they were, in Arabic, that they were going to kill us.”

Mobs have attacked reporters from CNN, Al Jazeera and other international news media, throwing rocks at their hotel windows, blocking their cars and breaking their equipment.  Journalists staying at the Ramses Hilton hotel next to Tahrir Square, the epicenter of the protests, say they have moved to other locations for fear of being attacked.

Mohamed Abdel Dayem of the New York-based Committee to Protect Journalists says these attacks are part of a government campaign.

“This by no stretch of the imagination can be the act of individuals,” he said. “It is well organized; it is systematic and it is persistent.”

Abdel Dayem says the Committee to Protect Journalists is investigating at least 30 reporter detentions.  He says the attacks and detentions are an effort to institute a “media blackout.”

“The goal is to eliminate witnesses, journalists and otherwise, but really journalists are always the primary witnesses in any situation like this,” said  Dayem. “And that is why we see the government and their plain clothes thugs engaging in this reprehensible behavior.”

Egypt’s vice president, Omar Suleiman, said Thursday that the government has had nothing to do with the violence gripping his country.  He called the attacks “a conspiracy” and said they will be investigated.

Abdel Dayem says that after 30 years of covering stories like the one in Egypt, his organization worries that the worst is yet to come.

Witnesses say the violence has killed at least four people and wounded more than 640 others in Cairo.  Reporters on the ground fear that the anti-journalist atmosphere will escalate as the turmoil continues across Egypt.