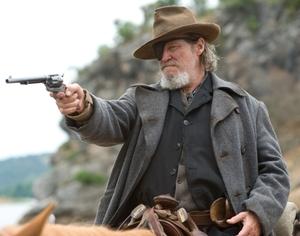 True Grit claimed the top spot, ending the reign of Little Fockers over a quiet start to 2011, while new nationwide releases Season of the Witch and Country Strong posted modest results. Overall business was off a precipitous 29 percent from the same weekend last year, when Avatar led.

Steadily galloping along, True Grit collected an estimated $15 million, cooling 39 percent from New Year’s weekend. The Western has racked up a mighty $110.4 million in 19 days, surpassing the final grosses of Unforgiven and Maverick. In terms of estimated attendance, it topped Brokeback Mountain on Saturday, and it eclipsed Tombstone on Sunday (Unforgiven and Maverick will likely prove insurmountable on this front).

Little Fockers claimed an estimated $13.8 million, off 46 percent for a $124 million sum in 19 days. Predecessor Meet the Fockers grossed $28.5 million on the same weekend (day and date) in 2005, was down 32 percent and had tallied $204.3 million to date with more than double the attendance.

Season of the Witch conjured an estimated $10.7 million on approximately 3,000 screens at 2,816 locations, which wasn’t as cursed as its genre and positioning might have suggested. Medieval movies often struggle at the box office, and Season of the Witch made more in two days than The Last Legion did in its entire run. Season marked the second release from distributor Relativity Media, and, on the bright side, blazed past their first The Warrior’s Way, which has made just $5.6 million. It also wasn’t the nadir of star Nicolas Cage’s career, opening higher than recent lows like The Wicker Man, Bangkok Dangerous and Next. Relativity’s exit polling indicated that Season’s audience was 52 percent male and 61 percent aged 25 years and older.

Down 48 percent, Tron Legacy was still in the mix with an estimated $9.8 million, and its total powered up to $147.9 million in 24 days. Boasting the best hold among nationwide releases (off six percent), Black Swan drew an estimated $8.35 million, rounding out the Top Five. The ballet thriller has packed a potent $61.5 million in 38 days, and distributor Fox Searchlight plans to expand it to over 2,000 locations on Jan. 14.

Hitting nationwide release (1,424 locations) after playing two venues in Los Angeles and Nashville over the holidays, Country Strong scored an estimated $7.3 million. The music drama had a bigger nationwide break than Crazy Heart did last year, but the latter had a slower roll-out and more business under its belt. Distributor Sony Pictures’ research showed that 73 percent of Country Strong’s audience was female and 51 percent was aged 30 years and older.