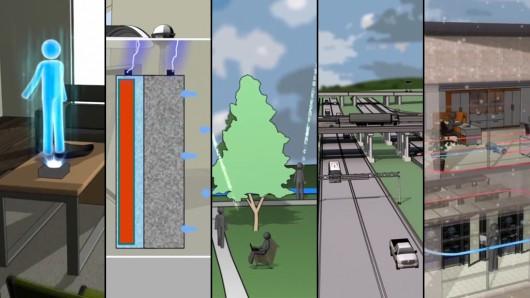 IBM (NYSE: IBM) formally unveiled the fifth annual “Next Five in Five” – a list of innovations that have the potential to change the way people work, live and play over the next five years:

• Batteries will breathe air to power our devices

• Your commute will be personalized

• Computers will help energize your city

The Next Five in Five is based on market and societal trends expected to transform our lives, as well as emerging technologies from IBM’s Labs around the world that can make these innovations possible.

In the next five years, technology innovations will change people’s lives in the following ways:

You’ll beam up your friends in 3-D

In the next five years, 3-D interfaces – like those in the movies – will let you interact with 3-D holograms of your friends in real time. Movies and TVs are already moving to 3-D, and as 3-D and holographic cameras get more sophisticated and miniaturized to fit into cell phones, you will be able to interact with photos, browse the Web and chat with your friends in entirely new ways.

Scientists are working to improve video chat to become holography chat – or “3-D telepresence.” The technique uses light beams scattered from objects and reconstructs a picture of that object, a similar technique to the one human eyes use to visualize our surroundings.

You’ll be able to see more than your friends in 3-D too. Just as a flat map of the earth has distortion at the poles that makes flight patterns look indirect, there is also distortion of data – which is becoming greater as digital information becomes “smarter” – like your digital photo album. Photos are now geo-tagged, the Web is capable of synching information across devices and computer interfaces are becoming more natural.

Scientists at IBM Research are working on new ways to visualize 3-D data, working on technology that would allow engineers to step inside designs of everything from buildings to software programs, running simulations of how diseases spread across interactive 3-D globes, and visualizing trends happening around the world on Twitter – all in real time and with little to no distortion.

Batteries will breathe air to power our devices

Ever wish you could make your laptop battery last all day without needing a charge? Or what about a cell phone that powers up by being carried in your pocket?


In the next five years, scientific advances in transistors and battery technology will allow your devices to last about 10 times longer than they do today. And better yet, in some cases, batteries may disappear altogether in smaller devices.

Instead of the heavy lithium-ion batteries used today, scientists are working on batteries that use the air we breath to react with energy-dense metal, eliminating a key inhibitor to longer lasting batteries. If successful, the result will be a lightweight, powerful and rechargeable battery capable of powering everything from electric cars to consumer devices.

But what if we could eliminate batteries alltogether?

By rethinking the basic building block of electronic devices, the transistor, IBM is aiming to reduce the amount of energy per transistor to less than 0.5 volts. With energy demands this low, we might be able to lose the battery altogether in some devices like mobile phones or e-readers.

The result would be battery-free electronic devices that can be charged using a technique called energy scavenging.  Some wrist watches use this today – they require no winding and charge based on the movement of your arm.  The same concept could be used to charge mobile phones. for example – just shake and dial.

While you may not be a physicist, you are a walking sensor. In five years, sensors in your phone, your car, your wallet and even your tweets will collect data that will give scientists a real-time picture of your environment. You’ll be able to contribute this data to fight global warming, save endangered species or track invasive plants or animals that threaten ecosystems around the world. In the next five years, a whole class of “citizen scientists” will emerge, using simple sensors that already exist to create massive data sets for research.

Simple observations such as when the first thaw occurs in your town, when the mosquitoes first appear, if there’s no water running where a stream should be – all this is valuable data that scientists don’t have in large sets today. Even your laptop can be used as a sensor to detect seismic activity. If properly employed and connected to a network of other computers, your laptop can help map out the aftermath of an earthquake quickly, speeding up the work of emergency responders and potentially saving lives.

IBM recently patented a technique that enables a system to accurately and precisely conduct post-event analysis of seismic events, such as earthquakes, as well as provide early warnings for tsunamis, which can follow earthquakes. The invention also provides the ability to rapidly measure and analyze the damage zone of an earthquake to help prioritize emergency response needed following an earthquake.

The company is also contributing mobile phone “apps” that allow typical citizens to contribute invaluable data to causes, like improving the quality of drinking water or reporting noise pollution. Already, an app called Creek Watch allows citizens to take a snapshot of a creek or stream, answer three simple questions about it and the data is automatically accessible by the local water authority.

Your commute will be personalized

Imagine your commute with no jam-packed highways, no crowded subways, no construction delays and not having to worry about being late for work. In the next five years, advanced analytics technologies will provide personalized recommendations that get commuters where they need to go in the fastest time. Adaptive traffic systems will intuitively learn traveler patterns and behavior to provide more dynamic travel safety and route information to travelers than is available today.

IBM researchers are developing new models that will predict the outcomes of varying transportation routes to provide information that goes well beyond traditional traffic reports, after-the fact devices that only indicate where you are already located in a traffic jam, and web-based applications that give estimated travel time in traffic.

Using new mathematical models and IBM’s predictive analytics technologies, the researchers will analyze and combine multiple possible scenarios that can affect commuters to deliver the best routes for daily travel, including many factors, such as traffic accidents, commuter’s location, current and planned road construction, most traveled days of the week, expected work start times, local events that may impact traffic, alternate options of transportation such as rail or ferries, parking availability and weather.

For example, by combining predictive analytics with real-time information about current travel congestion from sensors and other data, the system could recommend better ways to get to a destination, such as how to get to a nearby mass transit hub, whether the train is predicted to be on time, and whether parking is predicted to be available at the train station. New systems can learn from regular travel patterns where you are likely to go and then integrate all available data and prediction models to pinpoint the best route.

Computers will help energize your city

Innovations in computers and data centers are enabling the excessive heat and energy that they give off to do things like heat buildings in the winter and power air conditioning in the summer. Can you imagine if the energy poured into the world’s data centers could in turn be recycled for a city’s use?

With up to 50 percent of the energy consumed by a modern data center goes toward air cooling. Most of the heat is then wasted because it is just dumped into the atmosphere. New technologies, such as novel on-chip water-cooling systems developed by IBM, the thermal energy from a cluster of computer processors can be efficiently recycled to provide hot water for an office or houses.

A pilot project in Switzerland involving a computer system fitted with the technology is expected to save up to 30 tons of carbon dioxide emissions per year, the equivalent of an 85 percent carbon footprint reduction. A novel network of microfluidic capillaries inside a heat sink is attached to the surface of each chip in the computer cluster, which allows water to be piped to within microns of the semiconductor material itself. By having water flow so close to each chip, heat can be removed more efficiently. Water heated to 60 °C is then passed through a heat exchanger to provide heat that is delivered elsewhere.

Note: Registered journalists and bloggers can download broadcast-quality b-roll and other “Next 5 in 5” video from http://www.thenewsmarket.com/ibm [registration available online]