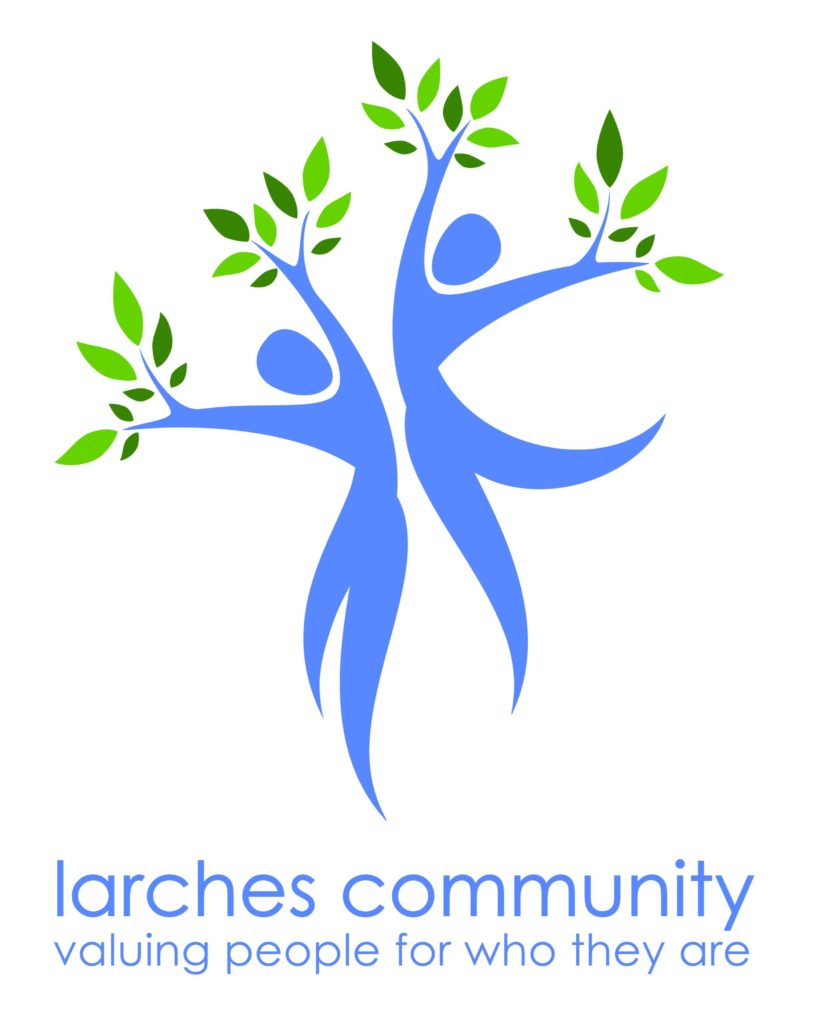 The Larches Community has a fresh new look thanks to local artist and graphic designer, Joanna Gilbert and Enterprise, the UK’s largest maintenance and front line service provider to the public sector and utility industry.(www.enterprise.plc.uk)

The Larches Community caters for adults over eighteen with autism and/or learning disabilities. There is a real need for the services they provide, amongst which is a Horticulture training programme, designed to get people with learning disabilities into a long term rewarding career.

The charity is now a recognised assessment centre with City & Guilds and the National Proficiency Test Council. Horticulture training gives people with learning disabilities and autism a chance to contribute to society and develop their self esteem. Participants are trained to become, amongst other roles, community gardeners and are given skills to take part in a number of social enterprises related to their new skill set. Often the tasks are repetitive, but this is ideally suited to people with autism and learning disabilities, who may need the structure of knowing exactly what they will need to do.

The Larches Community was chosen by the Enterprise team in Barnet as the local charity that the staff wished to support for 2010. Having also been chosen as one of the Mayor of Barnet’s charities, the choice for Enterprise was between the Larches Community and another organisation also on the Mayor’s list. Enterprise Client Liaison Manager, Natasha Hamblin says, “It was all on the flip of a coin and The Larches came out on top. Every year Enterprise supports a nationwide charity and offices are also able to support a local charity of their choice. So this year we decided that it was important for us to be involved with the local community in Barnet. We are very happy to be helping with the great work The Larches Community does”.

The Enterprise team in the Barnet office raises the money by holding dress down days every Friday, which their staff participate in. They also hold cake sales, with produce donated by a staff member, and the equivalent of the ‘naughty stair’. If a staff member forgets their security swipe card or other such misdemeanours, then they are ‘fined’ a minimum of £1. Two thirds of all money raised this year will go to the Larches Community. The other third goes to Enterprise’s Group Charity for 2010, SOS (Save our Soldiers).

Enterprise also donates time. Thanks to the staff the hall at Larches House in Edgware has been given a facelift. The whole hall was redecorated; pipes moved, radiators overhauled and Enterprise donated new blinds and also new chairs. The donations will enable to Larches Community to further develop their plans to become an autism training centre. In February next year, the Larches Community will be running the first of many educational seminars, aimed at providing information for parents, care workers, those in the medical professions, service providers and commissioners, about the challenges and management the issues around learning disabilities and autism. This is very valuable work, since it is a subject which is largely ignored and not widely spoken about. It is a dream of the Larches Community’s Chief Executive, Linda Edwards, to bring a wider understanding of the issues around learning disabilities and autism to the public domain. Linda Edwards says, “The donation of Enterprise’s time and resources to the Larches Community means a lot to us and will enable our organisation to keep growing so we can offer our services to even more people who really need them.”

The new look for the Larches Community has also been taken a step further with the creation of a vibrant new logo. Joanna Gilbert is a rising art star to look out for. She is holding an exhibition of her works in London on 18 October and has created a collection of twelve unique pieces for the occasion. The exhibition will showcase her bold and exciting style and the passion she has for life. Many of the pieces are representations of issues which Joanna faces in her own life, as an artist and a young wife and mother, who fits her life in around her creativity. The aptly titled ‘Stay at Home Mum’ is an example of today’s pressure on modern women to be everything – motherly and yet glamorous. The images Joanna has created are like a blog in pictures. Joanna is fascinated by the use of social media and how it generates information online that previously would not have been shared. She has named the exhibition ‘Windmills of My Mind’.

Joanna is also a talented graphic designer, and donated her time and talent by creating a brand new look for The Larches Community. The brief was all about celebrating the individual for their unique talents and abilities and growing people by giving them the tools to develop their potential. Joanna took the brief and created a logo full of movement and joy. “This was a simple task for me. As an artist I can picture the values which the Larches Community stands for and translate them into an image which relays the message.” The look is modern, yet simple and represents the ethos of the Charity.

The Larches Community has benefited greatly from the generosity of both Enterprise and Joanna Gilbert and is looking forward to passing on the benefits by offering events and training to transform the lives of people with autism and/or learning disabilities. As the strap line says, The Larches Community is all about valuing people for who they are.