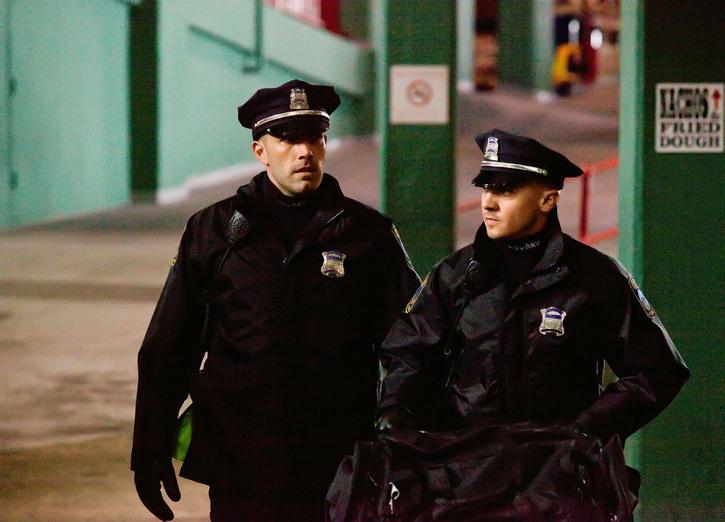 The Town was the talk of the box office over the weekend, Easy A received a lot of attention, Devil wasn’t elevated, and Alpha and Omega didn’t hunt. Overall business was a bit lower than the same weekend last year when Cloudy with a Chance of Meatballs led.

Striking approximately 3,500 screens at 2,861 locations, The Town hauled in an estimated $23.8 million, earning the comparison its marketing made to The Departed. The latter blazed onto the scene with $26.9 million on around 4,200 screens at 3,017 locations nearly four years ago (though its attendance was about 37 percent greater than The Town’s). Like Departed, The Town busted out of its genre norm, grossing more in one weekend than the final grosses of Gone Baby Gone, Reindeer Games and Pride & Glory and more than doubling the opening weekend of We Own the Night. Its estimated initial attendance was in the realm of Cop Land and Sleepers.

Upon closer inspection, The Town’s marketing campaign sizzled more than its Departed references and the movie’s nondescript title and poster would imply. Television ads hit the right crime thriller notes, promising high dramatic stakes and action, and were more energetic and to the point than the movie’s trailer. The ads punched up the proceedings by making the picture look (not just sound) like The Departed and by using the Eminem song “Not Afraid.” Distributor Warner Bros.’ exit polling indicated that 55 percent of The Town’s audience was male and 75 percent was aged 25 years and older, skewing older and more male than The Departed.


In second, Easy A aced its first weekend with an estimated $18.2 million on close to 3,500 screens at 2,856 locations. That was more than Jennifer’s Body (which debuted on the same weekend last year) made in its entire run, and it blew away many other comparable titles, including Youth in Revolt, Whip It and Sydney White. It also edged out the openings of The House Bunny, John Tucker Must Die and 10 Things I Hate About You. All told, Easy A had one of the higher-grossing openings for a teen comedy, though its attendance wasn’t in the league of Mean Girls, She’s All That and Superbad. According to distributor Sony Pictures’ research, Easy A’s audience was 67 percent female and 49 percent under 18 years old.

True to its pedestrian title, Devil delivered an average opening by horror standard, grossing an estimated $12.6 million on nearly 3,300 screens at 2,809 locations. Its start was a bit less than Quarantine but about the same as One Missed Call and The Eye among other horror movies. It was also the lowest-grossing opening yet for an M. Night Shyamalan-branded horror movie.

Alpha and Omega packed an estimated $9.2 million on around 3,000 screens at 2,625 locations. 1,625 locations presented the animated feature in the 3D illusion, and they accounted for around 68 percent of the gross. The 3D ticket price premium means that Alpha’s initial attendance was in the same range as Astro Boy, Everyone’s Hero and Happily N’Ever After and was about a quarter of Open Season. Distributor Lionsgate’s reporting showed an audience composition that was 63 percent female and primarily mothers and children. Indicative of Alpha’s tyke appeal was its 80 percent bump from Friday to Saturday, which was even greater than Cloudy with a Chance of Meatballs on the same weekend last year.

Resident Evil: Afterlife had a second-weekend fall in line with its predecessors. The horror action sequel tumbled 62 percent to an estimated $10.1 million, around 75 percent of which from 3D presentations. The second-weekend drops of the previous movies were, in chronological order, 62 percent, 62 percent and 66 percent. Despite having the highest gross through the ten-day point ($44 million), Afterlife continued to be the least-attended entry in the series.

Meanwhile, Inception saw the smallest decline among nationwide holdovers, easing 28 percent to an estimated $2 million, and its total stands at $285.2 million in 66 days. Its the third movie this year to spend ten weeks in the Top Ten, following Avatar and How to Train Your Dragon.

In milestone news, The Twilight Saga: Eclipse crossed the $300 million mark on its 81st day, while The Expendables passed $100 million on its 36th day.