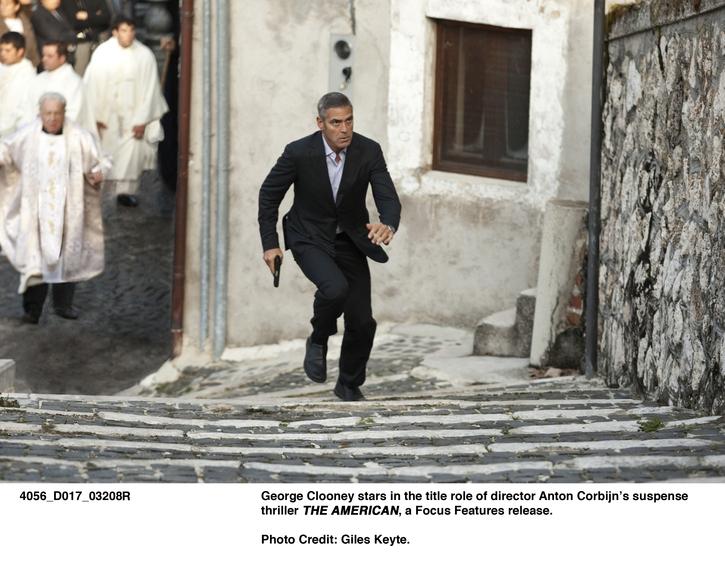 The summer movie season came to a typically quiet close over the four-day Labor Day weekend. The American led the way with a standard-issue George Clooney debut, Machete had an average late summer action movie launch, while Going the Distance stalled. Overall business, though, was up nearly four percent from the same timeframe last year.

The American earned an estimated $16.4 million over the long weekend at 2,823 locations for a $19.5 million tally since opening Wednesday. That was much more than recent Labor Day adult thrillers The Constant Gardener and Traitor, though the movie’s attendance was mid-pack among assasssin-themed pictures. Most of Geroge Clooney’s recent vehicles have opened in the same range as The American’s $13.1 million three-day weekend, including The Men Who Stare at Goats, Leatherheads, Michael Clayton and Syriana. As quiet as The American may seem, it had the fourth-highest grossing Labor Day launch ever. Distributor Focus Features reported that The American’s audience was 66 percent aged 35 years and older (88 percent was 25 years and older) and 55 percent male.

Though it was barely first on Friday, Machete lost steam faster than The American and wound up in second with an estimated $14 million at 2,670 locations. It had a stronger start than Gamer from the same weekend last year, and its $11.4 million Friday-to-Sunday weekend wasn’t far behind its source, the box office bust Grindhouse. However, it did less than half the business of director Robert Rodriguez last straight-forward action picture, Once Upon a Time in Mexico. Distributor 20th Century Fox’s research showed that 55 percent of Machete’s audience was male, 55 percent was 25 years and older, and 60 percent was Latino.

Last weekend’s top draw, Takers, came in third with an estimated $13.5 million. It slipped a normal 47 percent Frida-to-Sunday, and its cumulative take grew to $40 million in eleven days.

The Last Exorcism was cast aside in its second weekend, falling harder than average for a supernatural horror movie. It was off 64 percent Friday-to-Sunday and made an estimated $8.8 million for the four-day weekend. The percentage drop was was even more severe than The Fourth Kind and Exorcist: The Beginning experienced. The movie’s total rose to $33.6 million in eleven days.

With an estimated $8.6 million four-day start at 3,030 locations, Going the Distance isn’t in it for the long haul. The romantic comedy had one of the weakest debuts on record for its genre, especially considering the size of its release. It grossed about as much in four days as smaller releases The Switch and Love Happens made in three. Going the Distance’s audience was 66 percent female and 77 percent over 25 years and older (and 52 percent over 35 years old), according to distributor Warner Bros.

For more analysis on The American, Machete and Going the Distance analysis, click here to read the Weekend Briefing.

Despicable Me had the best hold among non-expanding nationwide holdovers. Its Friday-to-Sunday was up a tick from last weekend, and it pulled in an estimated $3.9 million Friday-to-Monday, bringing its total to a lofty $241.3 million in 60 days.

Inception also held its ground, easing seven percent Friday-to-Sunday and generating an estimated $5.9 million over the four-day weekend. Its sum grew to a mighty $278.4 million in 53 days.

The Other Guys was still in the mix as well, and the top-grossing picture from 2010, Toy Story 3, more than doubled its location count for summer’s last hurrah, inceasing its haul to $408.8 million in 81 days.

Down a respectable 30 percent Friday-to-Sunday, The Expendables marched closer to the $100 million mark. It bagged an estimated $8.5 million over the long weekend, pushing its sum to $94.1 million in 25 days.

Meanwhile, for the first time, Eat Pray Love trailed the cumulative gross of its analogue from last August, Julie & Julia, through the same point. Off 30 percent Friday-to-Sunday and losing weight faster than Julie, Eat packed an estimated $6.3 million four-day weekend for a $70.4 million tally in 25 days, or around $1 million behind Julie.