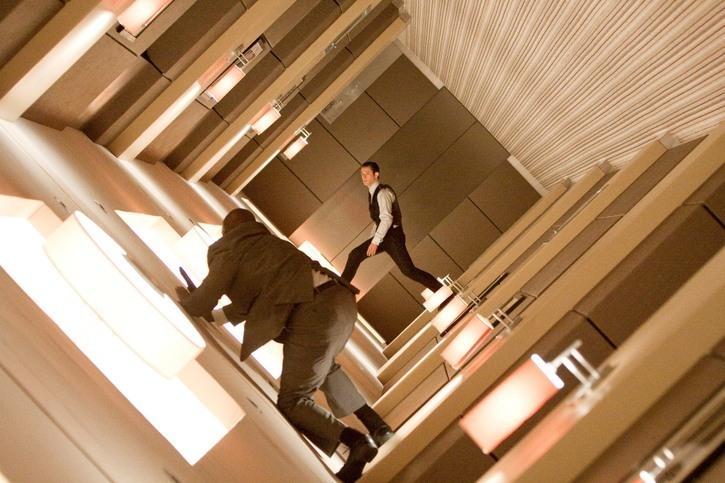 While Salt had a solid start, the weekend box office was again headlined by Inception, this time with how well it held up. Christopher Nolan‘s dream caper drew an estimated $42.9 million, easing a mere 32 percent from last weekend. That marked the smallest second-weekend percentage drop of the summer for any major release and the second smallest for the year behind the much lower-grossing Tooth Fairy.

To find a comparable genre title to Inception that held better without the aid of a holiday, one has to go back to the first Matrix in 1999. Inception also had Mr. Nolan’s scantest decline for a nationwide release, losing less steam than The Prestige (35 percent drop). With $143 million in ten days, Inception has generated more business than Batman Begins through the same point, and it has mopped the floor with similar summer science fiction titles like I, Robot and Minority Report.

Salt pulled in an estimated $36.5 million on approximately 5,200 screens at 3,612 locations, which was an above average launch for a serious spy movie. In terms of estimated attendance, it was in the same range as The Bourne Identity, which was apt given that both featured super spies on the run with their identities in question. Salt star Angelina Jolie batted in her wheelhouse and scored her fourth best opening after Wanted, Mr. & Mrs. Smith and Lara Croft: Tomb Raider. Ms. Jolie has proven to only be bankable in action movies, but has mostly been ignored by audiences in other genres.

The marketing for Salt hearkened Bourne with its “Who Is Salt?” campaign and its chase scenes. As its release closed in, it ultimately appeared to be a typical albeit slick fugitive action movie, selling a seemingly simple premise and lots of stunts. Going on the run to clear one’s name is a perennially popular premise for action thrillers, used for such hits as The Fugitive, Enemy of the State, Minority Report, Mission: Impossible and the Bourne series. By pushing the mystery of Jolie’s character and how she cannot be stopped through a barrage of action shots, the marketing played into Jolie’s distant persona, instead of presenting a fully relatable character. Distributor Sony Pictures’ exit polling indicated that 53 percent of the audience was female and 59 percent was over 25 years old.

The weekend’s other new nationwide release, Ramona and Beezus, garnered little interest, making an estimated $8 million at 2,719 locations. That was in the same league as titles like Aquamarine and Nancy Drew. Ramona was the latest children’s book adaptation from Walden Media, which has had a mixed track record. According to distributor 20th Century Fox’s research, 75 percent of Ramona‘s audience was female, 57 percent was under 25 years old, and 69 percent was parents and their children.

The Sorcerer’s Apprentice took a sizable hit compared to the other holdovers surrounding it, tumbling 45 percent to an estimated $9.7 million for a $42.6 million tally in 12 days. True to its franchise, The Twilight Saga: Eclipse fell sharply again, off 48 percent to an estimated $7 million, but still led its predecessors through the same point with $279.7 million in 26 days.

Overall business was up eight percent over the same timeframe last year when G-Force squeaked past holdover Harry Potter and the Half-Blood Prince.