A Message From President Barack Obama about Wall Street Reforms 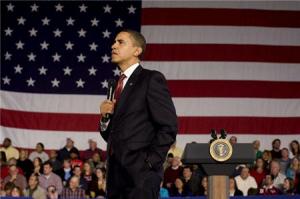 When you and I set out on this journey three years ago, we knew that ours would be a lengthy struggle to build a new foundation for this country — one that would require squaring off against the special interests who had spent decades stacking the deck in their favor.

Today, it is clear that you have shifted the odds.

This morning, I signed into law a bill that represents the most sweeping reforms of Wall Street since the Great Depression, and the toughest consumer financial protections this nation has ever seen. I know that I am able to do so only because the tens of thousands of volunteers who make up the backbone of this movement overcame the most potent attack ads and the most powerful lobbying the special interests could put forward.

Our special-interest opponents and their Republican allies have now set their sights on the elections in November as their best chance to overturn the historic progress we’ve made together.

Organizing for America counts entirely on supporters like you to fight back — no special interests, no corporate PACs. To keep making change and to defend the change we have already won, we need you — and at least 97 other people in San Francisco — to contribute so we have the resources necessary going into the election.

Please donate $5 today and help Organizing for America lay the groundwork for the fights ahead.

Because of Wall Street reform, we will ensure that Americans applying for a credit card, a mortgage, or a student loan will never again be asked to sign their name under pages of confusing fine print. We will crack down on abusive lending practices and make sure that lenders don’t cheat the system — and create a new watchdog to enforce these consumer protections.

And we will put an end to taxpayer-funded bailouts, giving us the ability to wind down any large financial institution if it should ever fail.

The passage of Wall Street reform is at the forefront of the change we seek, and it will provide a foundation for a stronger and safer economy.

It is a foundation built upon the progress of the Recovery Act, which has turned 22 months of job losses into six consecutive months of private-sector job growth. And it is a foundation reinforced by the historic health reform we passed this spring, which is already giving new benefits to more than 100 million Americans, ushering another 1 million Americans into coverage by next year.

But today’s victory is not where our fight ends.

Organizing for America and I will move forward in the months ahead on the tough fights we have yet to finish — even if cynics say we should wait until after the fall elections. This movement has never catered to the conventional wisdom of Washington. And we have fought to ensure that our progress is never held hostage by our politics.

You and I did not build this movement to win one election. We did not come together to pass one single piece of legislation. We are fighting for nothing less than a new foundation for our country — and that work is not complete. As we face the challenges ahead, I am relying on you to stand with me.

Thank you for helping us get here,

Paid for by Organizing for America, a project of the Democratic National Committee — 430 South Capitol Street SE, Washington, D.C. 20003. This communication is not authorized by any candidate or candidate’s committee.