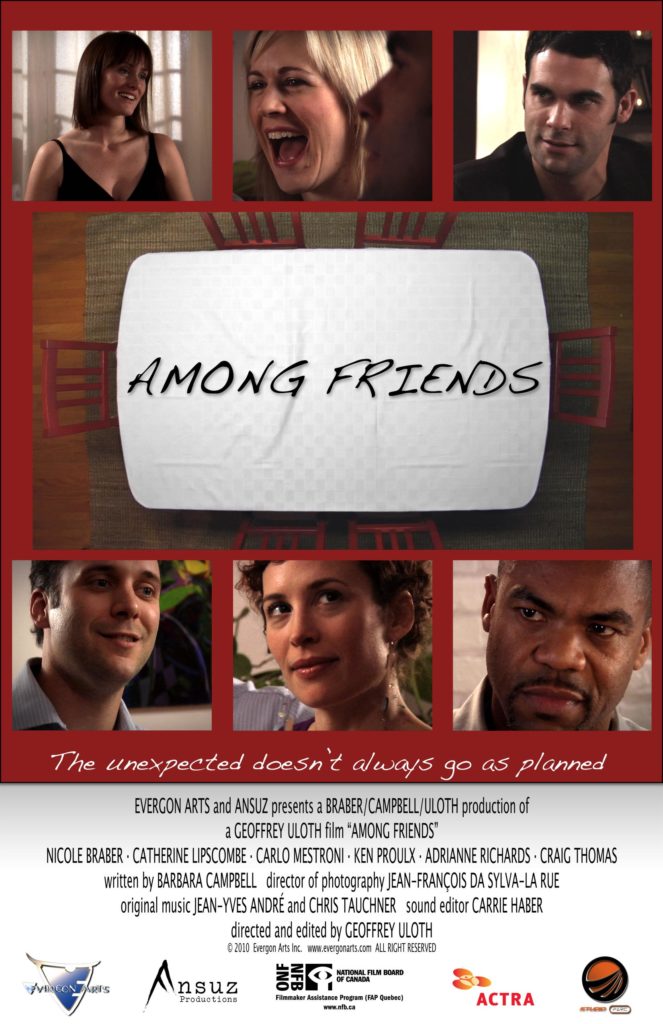 EVERGON ARTS and ANSUZ PRODUCTIONS are proud to announce the Fantasia Film Festival screening of “AMONG FRIENDS” — a short drama that has caused festival audiences to laugh, cry and argue over the controversial approach taken by this shorts to love, loyalty, commitment and sexuality among friends.

SYNOPSIS – A shocking dinner invitation sends close friends into uncharted territory that will change their relationships forever… A HOME-GROWN COLLABORATION WITH NATIONAL SUPPORT – “AMONG FRIENDS” had its world premiere at the 2009 Montreal World Film Festival.

The entire cast and crew of this production are filmmakers and artists from Montreal. The film was largely financed by its co-producers and made possible by extensive volunteer efforts of professional talent. NFB lent their support for post-production to help bring Among Friends to the screen.

When local actor Nicole Braber proposed the zany concept for this film to emerging screenwriter Barbara Campbell three years ago, they immediately decided to co-produce the project and finance it themselves (on a shoe-string budget). They asked Montreal filmmaker Geoffrey Uloth (of award-winning “Wildflowers” and “The Ecstasy Note”) to direct. Geoff then attracted the participation of DOP Jean-François Da Sylva-La Rue and an experienced crew of professionals.

An amazing cast, assembled from the Carter Thor Acting Studio, along with their Performance Director, Jock MacDonald, brought the crackling dialogue and emotional intensity of the provocative script to life. Local musicians Jean-Yves André and Chris Tauchner rounded out the creative team and recorded expressive original music for the film.

You are invited to attend the screening of AMONG FRIENDS:

Presented by: EVERGON ARTS and ANSUZ PRODUCTIONS A Braber/Campbell/Uloth Production

For the event, go to:

Tickets $8 (for sale in advance online and at the theatre)

AMONG FRIENDS is presented in the “Courts Métrages Québécois 7” program.