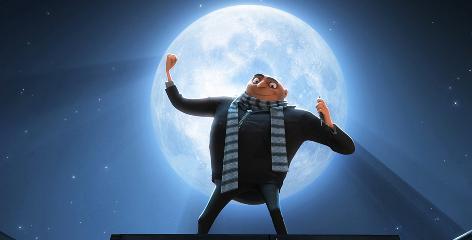 IBM (NYSE: IBM) announced today that it has collaborated with Illumination Entertainment to help it meet the massive production requirements involved in creating its new computer-animated 3-D feature film, “Despicable Me.”  The film, which stars Steve Carell as a villain named Gru who hatches a plot to become the world’s greatest super villain, was developed and produced by Illumination Entertainment and is being released by Universal Studios on July 9 in the U.S.

With today’s increased emphasis on animation and visual effects, the digital rendering process has become a competitive differentiator and critical production capability for studios of all sizes.  The process involves literally hundreds of thousands of individual images that are created by hand and rendered through digital animation to effectively build each individual frame of the film, all of which requires intensive computing power.   For “Despicable Me” the animation process generated 142 terabytes of data — an amount roughly equivalent to the traffic generated by over 118 million active MySpace users or 250,000 streams of 25 million songs.

“‘Despicable Me’ represents a breakthrough in the emerging model of collaborative, geographically distributed digital movie making, which we are proud to be building from the ground up.  By seamlessly bringing together creative talent from the U.S., France and other locations around the world via technology, we completed a massive production undertaking that is often left to larger single-location Hollywood studios,” said Chris Meledandri, Producer of “Despicable Me” and founder of Illumination Entertainment.  “Thanks to the capacity of IBM’s rendering technology and the skills of our artists, we were able to bring our creative vision to life through the completion of a wonderfully entertaining film and build the foundation for a large pipeline of projects in development.”

Illumination Entertainment collaborated with Mac Guff Ligne, a Paris-based digital production studio, to complete the 12 months of intensive graphics and 3-D animation rendering, amounting to up to 500,000 frames per week.  To complete the project, the team needed to quickly design and build a dedicated server farm capable of meeting these demanding workloads across its 330 person team of artists, producers and support staff.  The production team also needed a space efficient, IT solution that was easy to configure, manage and expand. To avoid the potentially high air conditioning costs associated with operating a data center 24 hours a day, 7 days a week, the company also wanted an energy efficient technology platform.

Illumination tapped IBM and its Paris-based Business Partner Serviware to build a server farm based on IBM’s iDataPlex system.  With this system’s efficient design and flexible configuration, the company was able to meet the intense computing requirements for the film and save room by doubling the number of systems that can run in a single IBM rack. The entire space used to house the data center amounted to four parking spots in the garage of the production facility, about half of what had initially been allotted.  The studio’s iDataPlex solution included IBM’s innovative Rear Door Heat eXchanger, a water-cooled door that allows the system to run with no air conditioning required, saving up to 40% of the power used in typical server configurations.   Overall, the installation included 6,500 processor cores.

“IBM is delighted to work with Illumination Entertainment on this exciting project to advance digital film-making production,” said Steve Canepa, general manager, IBM Media & Entertainment industry.  “The combination of our film industry expertise and powerful, flexible and cost-effective technology solutions is helping to accelerate the adoption of new digital technologies like 3-D into the creative process of film making.”

Illumination Entertainment’s film “Despicable Me,” is being released by Universal Studios July 9. The company was founded in 2007 by Chris Meledandri, who also supervised and/or executive produced “Ice Age 1 & 2”, “Alvin and the Chipmunks”, “The Simpson Movie” and “Dr. Suess’ Horton Hears a Who.”  In France, the local language version: “Moi, moche et mechant” is scheduled to hit the theaters on October 13. Visit “Despicable Me” at Facebook at http://www.facebook.com/DespicableMe.