Tungle Corp Announces the Formation of a Board of Advisors 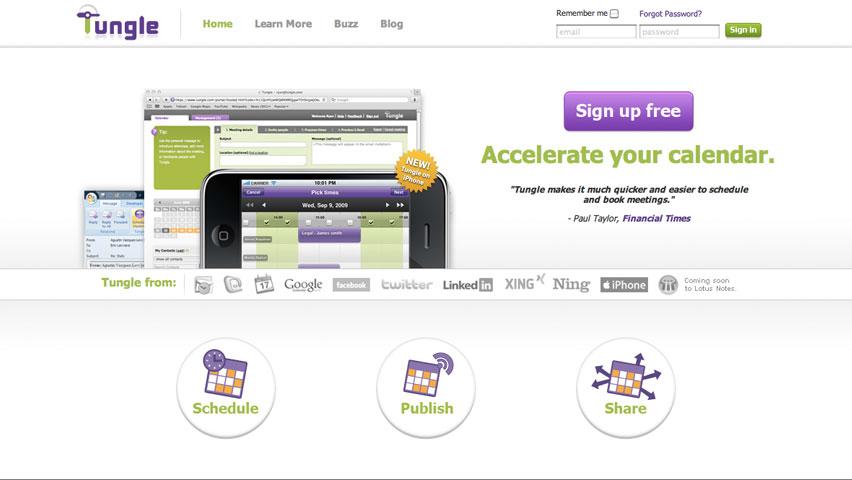 – Tungle Corp., the company that is revolutionizing the online scheduling and calendar industry, today announced the creation of a board of advisorsthat will include Robert Scoble, Don Dodge, Scott Stratten, Dave McClure and Ellen Levy. The board of advisors will provide advice and direction to Tungle Corp. as it prepares for its next stage of growth.

“Each of these individuals in their own right is a force to be reckoned with. As a group, they become even stronger”, said Marc Gingras, Founder and CEO of Tungle Corp. “We’ve assembled this group because we know that each of them is a thought leader with a unique skill and a finely honed sense of where the sector is headed. Their insights are a key component to ensure our solution remains on the cutting edge of a quickly evolving ecosystem.”

Tungle.me is used to schedule meetings in over 30 percent of Fortune 100 companies, over 700 Universities, and in more than 100 countries around the globe.

Short bio of Advisory Board Members:

Robert Scoble is an American blogger, technical evangelist, and author. Scoble is best known for his blog, Scobleizer, which came to prominence during his tenure as a technical evangelist at Microsoft. He currently works for Rackspace and the Rackspace sponsored community site Building 43. Robert previously worked for Fast Company as a video blogger. He is also the co-author of Naked Conversations: How Blogs are Changing the Way Businesses Talk with Customers.

Don Dodge is a Developer Advocate at Google helping developers build new applications on Google platforms and technologies. Prior to joining Google Don was a startup evangelist at Microsoft. Don is also a veteran of five start-ups including Forte Software, AltaVista, Napster, Bowstreet, and Groove Networks. Don has been in the software business for more than 25 years. He started his software career with Digital Equipment, aka DEC, in the database group. He was part of the leadership team of five software start-ups. Forte Software was the first multiplatform object oriented development environment. AltaVista was the first search engine on the web. Napster was the first P2P file-sharing network. Bowstreet was the first web services development environment. Groove Networks was the first secure P2P collaboration platform.

Scott Stratten is the President of Un-Marketing.com. He is an expert in Viral, Social, and Authentic Marketing. His book “UnMarketing: Stop Marketing. Start Engaging” is due to hit the shelves in the Fall of 2010 from Wiley & Sons. His clients’ viral marketing videos have been viewed over 60 million times and have generated massive profits. He recently appeared in the Wall Street Journal, Mashable.com, USA Today, CNN.com and Fast Company. Scott is a sought after speaker and consultant who is helping organizations around the world better engage with their current and potential customer base using social media, viral marketing and just plain old engaging conversation.

Dave McClure likes to hang out with entrepreneurs, and occasionally help or invest in their startups if they let him. Dave has been geeking out in Silicon Valley for over twenty years, and has worked with companies such as PayPal, Mint, Founders Fund, Facebook, LinkedIn, SlideShare, Twilio, Simply Hired, O’Reilly Media, Intel, & Microsoft. Many years ago he used to do real work like coding or marketing or running conferences, but these days he mostly does useless stuff like sending lots of email, blogging, and hanging out on Facebook and Twitter.