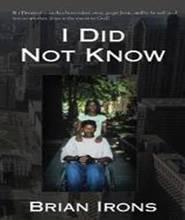 Book Title: I Did Not Know

Brian, the athlete died for 11 minutes–God raised the dead

The author, Brian Irons tells his story. Well, it’s like this; one day, Brian Irons decided to smoke marijuana with the teammates. He became addicted to this drug. Not realizing what he had gotten himself into, the addiction from the drug took over his life. He abused all types of drugs for more than a decade.

He decided to get high one more time. Not knowing this “one more time” to get high would affect his health. While getting high, his heart stopped beating for eleven minutes. He slipped into a coma, and stayed in it for ten days. Due to the coma and heart stopping experience, his brain suffered a disastrous injury. Because of this brain injury, the nerves in his left leg had been damaged. For a total of 8 months, 3 different hospitals became his home. He now uses a wheelchair, and he still has that same driving power. Nothing really gets this man down.

For the wages of sin is death: Brian was a sinner just like the rest of us. The same sins he committed, you committed too. God watched you do harm to your body, and he watched Brian do harm to his body, too. Death is what Brian owed, but God’s mercy cancelled the dept. Brian Irons might not be a professional athlete, nor does he own a college degree, but his name is now printed on the front of a book cover. Wow, what an amazing thing God did for this man. If you listen to God’s voice when he speaks, and do what he says, you will succeed.