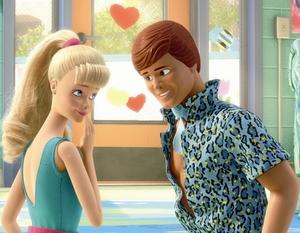 The Toy Story 3 train kept chugging over the weekend, out-gunning the debuts of two star-driven vehicles. Grown Ups logged a standard Adam Sandler start, while Knight & Day generated a sub-standard Tom Cruise kick-off. Overall business was down 18 percent from the same timeframe last year, when Transformers: Revenge of the Fallen was unleashed, and attendance was relatively soft for the time of year.

Generating an estimated $59 million, Toy Story 3 posted the seventh highest-grossing second weekend ever, though its 3D share dipped to 57 percent, down from last weekend’s 60 percent. The animated sequel’s 47 percent drop may seem steep, but it was normal, given the movie’s intense initial interest and the strength of weekdays at this time of year. In 10 days, Toy Story 3 has tallied $226.6 million, already ranking fifth for 2010, just behind Shrek Forever After (which it will surpass on Monday). That also stands as the seventh highest-grossing 10-day opening ever, lording over any other animated feature.

Grown Ups yanked an estimated $41 million from approximately 5,100 screens at 3,534 locations, which was the fourth biggest-grossing opening for an Adam Sandler movie but was his ninth best in terms of estimated attendance. Given the added heft of Sandler cronies Kevin James, Chris Rock, David Spade and Rob Schneider, that may not seem impressive, but ensemble movies often don’t equal the sum of their parts. The cast did make extensive promotional appearances, often targeting sports events dating back to the Super Bowl, while the movie’s outdoor campaign used real pictures of the actors from when they were 12 years old. Grown Ups, though, came off as these actors hanging out on a family vacation. Lacking a crackling comic premise, there was no urgency to see it in theaters, but Sandler batting in his wheelhouse again was still a draw. Distributor Sony Pictures’ exit polling indicated that 53 percent of the audience was female and that 52 percent was under 25 years old.

Knight & Day enlisted an estimated $20.5 million on around 4,100 screens at 3,098 locations, bringing its five-day haul to $27.8 million. Attendance was below average for a spy movie, and it was Tom Cruise’s lowest in a leading role since Far and Away in 1992 (which had nearly as many viewers from about half the theaters). Mr. Cruise’s last summer action spectacle, Mission: Impossible III, was deemed somewhat of a disappointment, but it still debuted to $47.7 million. Co-star Cameron Diaz has never been as consistent a performer as Cruise, and Knight & Day is a reunion of the two actors: Diaz had a supporting role in Cruise’s Vanilla Sky, which started at $25 million (or the equivalent of over $35 million adjusted for ticket price inflation). Distributor 20th Century Fox’s research showed that Knight & Day’s audience had an even split between genders and that 56 percent was over 25 years old.

Outside of the Mission: Impossible movies, Tom Cruise’s pictures generally aren’t prone to record-breaking launches, and they often enjoy relatively long runs, but, even under the rosiest of circumstances moving forward, Knight & Day is unlikely to reach the $100 million mark that used to be the norm for Mr. Cruise. While Cruise reprised the running man routine that has served him well in the past, Knight & Day was the dramatic star’s first at-bat in the action-comedy genre.

Unfortunately, the movie’s marketers didn’t get the memo: instead of a summer romp, Knight & Day was presented as if it had a similar premise to Collateral, only more brightly lit and with more quips, and the drama was punctuated by the Muse song “Uprising” (also just used to push the V television series). The ads weren’t clear about the movie’s story or tone, leaving only the action spectacle and star power to carry the day. In this context, though, Cruise seemed unhinged (Diaz being the audience surrogate), making the movie an out-of-form self-referential nod to Cruise’s oft-criticized off-screen behavior of recent years. Sensing things weren’t working, the ad campaign shifted gears at the last minute, cutting the Muse song but offering only more generics.