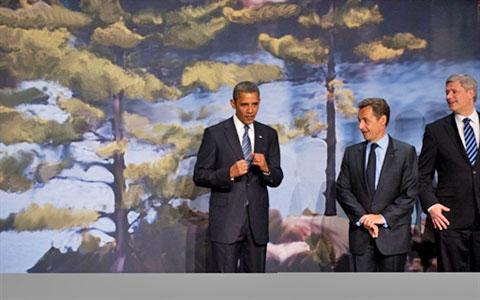 Leaders of the G8 and other groups Friday pledged billions of dollars over the next five years to help cut the number of women who die in childbirth around the world.  Critics say governments have not fully delivered the money promised on this issue at previous international gatherings.

Canadian Prime Minister Stephen Harper said too many women and children die of poor health in developing nations, and he has convinced countries and foundations to devote significant amounts of money to reduce the toll. “Together we are committed to moving the world toward the day when women in developing countries will not die or suffer disabilities from pregnancy or childbirth,” he said.

G8 members have committed $5 billion over the next five years, other nations (including  Netherlands, Norway, New Zealand, South Korea, Spain, and Switzerland  and foundations (the Gates Foundation and the United Nations Foundation) offered another $2.3 billion.

Earlier, Mr. Harper urged his colleagues to make – and fulfill – aid commitments. “Accountability is the key, we must follow through on our initiatives.  If the countries that have the most resources will not take action on the most urgent issues, then who will? ”

The Prime Minister said the G8 has published an assessment of how well nations have kept their promises and how effective the programs have been.  He says public scrutiny, tight budgets, and the unusually deep involvement of finance ministers mean the pledges are realistic and likely to be fulfilled.

Dorothy Ngoma, Executive Director of Nurses and Midwives of Malawi says the money would be welcome because maternal health issues are a crisis, and have hit her small nation particularly hard.  “Every day, we lose about one thousand women (around the world).  In the year, we have lost 350,000 women.  In my country, Malawi, we lose 16 women every day that goes by.  As we are talking now we lost 16, today by the end of the day, we will have lost 16, tomorrow 16, every day like that,” she said.

Representatives of the charity Oxfam say previous G-8 meetings and gatherings at the United Nations brought promises of about $50 billion, but less than that has actually been delivered.

Oxfam officials also say commitments should be for “new” money, not redirecting spending from other social priorities like education or efforts to provide clean water.

The new assessment of donations points to billions of dollars spent to make progress on many social and health issues in recent years, but concedes wealthy nations have fallen billions short of their promises.