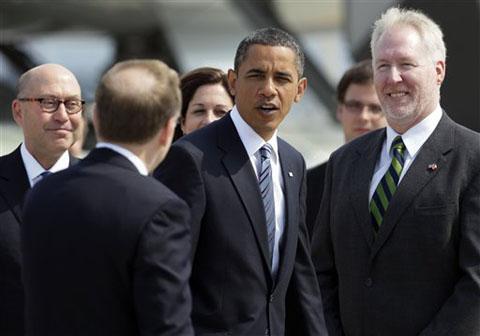 President Barack Obama is urging G-8 and G-20 nations to work together on steps already taken to repair and strengthen the global economy. The president arrived in Toronto for the G-8 and G-20 summits strengthened by U.S. lawmakers who reached an agreement that would send a sweeping financial system reform bill to the president’s desk.

In remarks at the White House before departing for Toronto, President Obama referred to steps taken by past G-20 summits in London and last year in Pittsburgh that he said brought the global economy back from the brink.

The president said major industrialized nations in the G-8 and those in the wider G-20 group need to coordinate efforts to promote growth and pursue financial reform to ensure that this progress doesn’t go to waste.

“We need to act in concert for a simple reason,” he said. “This crisis proved and events continue to affirm that our national economies are inextricably linked, and just as economic turmoil in one place can quickly spread to another, safeguards in each of our nations can help protect all nations.”

President Obama arrived in Toronto strengthened by an agreement between House and Senate negotiators, after months of effort on Capitol Hill, on a final version of legislation to reform the U.S. financial system. Both chambers of Congress will have to approve the bill before the president can sign it.

But while that development is a help to Mr. Obama at the G-20, he faces some significant challenges in an atmosphere economic and financial observers say has shifted from cooperation 18 months ago amid the financial crisis.

Amid concerns in Europe and worldwide about budget deficits and debt, focused on the fiscal crisis in Greece, a major question is what degree of agreement can be reached on the question of spending versus deficit reduction.

Magazine Sale – Save 10% on any one print magazine subscription with coupon J9K3V8H!

President Obama has urged G-8, G-20 nations not to put the brakes on spending to stimulate economic growth. But key European nations such as Germany, Britain, and France, and host Canada, have been focusing on debt and government deficit reduction.

In Hutsville, Ontario outside Toronto, the president and other G-8 leaders are spending Friday discussing development issues, joined by 7 African leaders including those from South Africa, Nigeria, and Ethiopia.

G-8 discussions on Saturday turn to peace and security issues including subjects such as Iran, North Korea, Afghanistan, Pakistan and the Middle East peace process, before the wider G-20 summit begins in Toronto.