After Over 14 Years in Peruvian Prison, Jailed US Activist Lori Berenson Ordered Freed on Parole 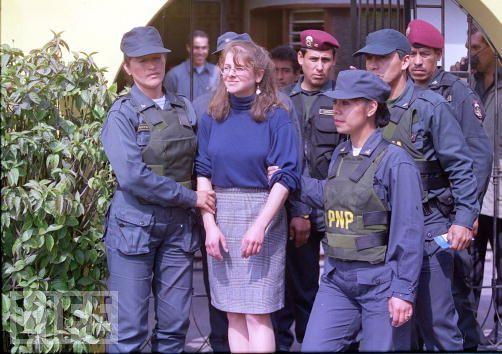 The jailed American activist Lori Berenson has been ordered freed on parole in Peru. Berenson has spent over fourteen years in prison after hooded Peruvian military judges convicted her of collaborating with the rebel group MRTA. She has consistently maintained her innocence. We speak to Lori’s father, Mark Berenson. [includes rush transcript]

This transcript is available free of charge. However, donations help us provide closed captioning for the deaf and hard of hearing on our TV broadcast. Thank you for your generous contribution.

AMY GOODMAN: A Peruvian judge has ordered the jailed American activist Lori Berenson freed on parole after over fourteen years in jail. In 1995, Lori Berenson was arrested on a public bus in downtown Lima, accused of collaborating with the rebel group Túpac Amaru Revolutionary Movement, or MRTA. With a gun held to her head, a hooded military tribunal sentenced Berenson to life in prison for, quote, “treason against the fatherland.” Four-and-a-half years later, due to international pressure, her sentence was vacated, and she was retried by a civilian court, which reduced her sentence to twenty years. Lori Berenson has consistently maintained her innocence. In 2002, the Inter-American Commission on Human Rights declared that neither of her trials complied with international standards and violated her rights to due process. Lori Berenson and her now-one-year-old son Salvador are expected to be released from jail as early as today or tomorrow, but the Peruvian government has said they’ll appeal the judge’s ruling. Lori may be required to stay in Peru for the next five years on parole.

We’re joined in our studio right now by a very happy father, by Mark Berenson. He and his wife Rhoda run the website freelori.org.

MARK BERENSON: Thank you so much, Amy, not only today in this best morning of my life in more than fourteen-and-a-half years, but for all you’ve done to keep Lori’s story alive with truth in the image of the people who’ve listened to this wonderful program.

AMY GOODMAN: Well, I certainly remember going to Peru to interview Lori in the prison she was being held at in the time, in Arequipa. Now she’s in the Lima prison. Talk about yesterday. How did you hear? What happened yesterday?

MARK BERENSON: Yesterday, the judge had announced—we were in a hearing last Monday, eight days ago, and the judge announced a decision would be rendered yesterday. And one of Lori’s friends in the courtroom text-messaged us saying that it was going to be positive, and then the US embassy called us very soon after. And then Lori called us twenty minutes after that. And I cannot tell you what went through my mind after fourteen-and-a-half years waiting for this moment to finally happen. And we never gave up hope, but as I’m getting older in life, I always dreamed I wanted to see Lori in freedom. And now that she has this beautiful one-year-old grandson of mine, Salvador, I’m hoping that he will take his first step in freedom and that I’ll be able to see that tomorrow. We’re going down to Peru this morning. And that’s what I’ve dreamed of. And my life will be complete to see them both walk in freedom, and I will say I’ve lived a full life to see them in freedom.

AMY GOODMAN: And she is going to be released tomorrow?

MARK BERENSON: We believe tomorrow or Friday. The papers have—there’s a lot of paperwork that has to be done. And in fact, they reported she might leave today. And Lori actually said, “No, please let me stay in prison until my parents come down.” We have to set up the apartment that she has and make it more child-proof. And it’s going to be a big transition for both of them. But I want to cherish the experience of seeing them take their first steps out of the jail and breathe free air.

We took Salvador to a park in January when he was eight months old, and this child had never been out of the prison before, except to be put into a cab to go to a doctor. He sat in the park and looked at a tree for the first time in his life. He saw children playing in the grass, dogs running with their masters, automobiles walking by. He was so in awe of his environment. Lori’s main concern, in a year he was outgrowing the confines of a prison with a six-by-ten-foot cell, as he’s now walking at a year. She kept him in the yard most of the day, so he’d have more place to go. But she didn’t want to stifle his growth.

AMY GOODMAN: Talk about what happened fifteen, fourteen years ago, which is not where you want to be right now, since you’re thinking of her freedom. But for people who are hearing about Lori Berenson’s case for the first time, how she ended up in prison

MARK BERENSON: She was a human rights activist who cared about humanity, had a strong concern for social justice, left MIT in good standing during a time when there was a crisis in El Salvador, and she felt that she had to contribute to working for freedom. She worked for CISPES, the committee for El Salvador in Washington’s office, and then, from there, went to El Salvador and Nicaragua while the war was going on and worked as a secretary for the leader of the FMLN, Salvador Sánchez Cerén, who is now the vice president of the Republic of El Salvador. And Lori named her child after him. She can’t wait to call him on the phone. He has offered her a job in the educational ministry of El Salvador.

She wants to come to the United States. She has had health problems. The baby has health problems. And it’s important that they start their life together in freedom and make sure that they’re taken care of health-wise.

AMY GOODMAN: What was the change on the part of the Peruvian government? It’s very interesting that the man who went after her most fiercely was the former president of Peru, Fujimori, called her “terrorista feminista” and would constantly hold up her passport wherever he went. Now he is in prison, and she will be set free.

MARK BERENSON: Wonderful. Isn’t it amazing that Lori will be free, while Alberto Fujimori, one of the scoundrels of this earth, in jail for human rights violations, murder, corruption, kidnapping, torture, he faces a twenty-five-year sentence, although 40 percent of the public would like to see this man free. And his daughter Keiko is running for president on really one item: free my father. She called in the paper today for Lori to go back to jail. It’s sad that that happened.

I have—I feel, at this point, perhaps the best thing for Peruvian society—it’s a Christian country—would be for general amnesty for all. Lori is free. Fujimori is seventy-five years old or whatever; he’s not a healthy man. So many prisoners that we know should be free, people I have seen, as I go to Peru all the time over these years, who have certainly paid their debts to society and would like to have a life and really could contribute to society.

MARK BERENSON: Well, right now, it’s not clear what the law is. For some types of crimes, you’re automatically expelled. In other types of crimes, you have to serve parole in the country. Lori’s sentence calls for her being expelled when she completes her sentence, but we don’t know what that means. These things are still up in the air. But right now, we’re just enjoying the moment and also knowing that Lori does have health—severe health problems with her back, and the child has a urological problem that needs surgery next week, and she plans to have that done in Lima, since she’s not obviously coming to the United States right away.

AMY GOODMAN: Does she want to come to the United States?

MARK BERENSON: She definitely would like to come back, and she misses tremendously her friends and her family. She’s going to see a very, very different world, Amy. Can you imagine never having seen the computer to what it is today. She’s never seen virtual reality. She’s never seen the internet. She used to set up email systems in Mexico and El Salvador, because she had gone to MIT. But picture what info technology was like fifteen years ago and that she has never seen how you can go from one website to another by clicking on a URL. And that’s what I plan to do tomorrow, if in freedom: show her how to use the computer. She’s a quick learner. But she’s going to be amazed.

AMY GOODMAN: We have five seconds.

MARK BERENSON: So I just want to thank you and your audience for the support that has sustained us these many years.

AMY GOODMAN: Well, we will link online to our different interviews with Lori Berenson. You can just go to democracynow.org. Mark Berenson, thanks so much for joining us.