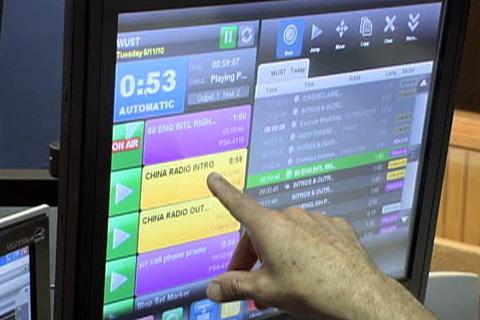 At a time when Western media companies are cutting back, Chinese government-run news services are expanding rapidly. The Chinese effort includes weekday broadcasts from a small radio station, just outside of Washington, DC.

Here on nine acres that used to be a dairy farm, China first broadcast radio news to America. The year was 1993, and station owner Alan Pendleton made the deal.

BOWMAN: Both, then and now, what do you think China’s goal is with this global media push?

PENDLETON: “I think it’s to present sort of a human face on what China is and how they see themselves. And to also provide their point of view and interpretation of world events.”

Each morning, engineer Miles Mead switches satellite feeds … down with the audio from Paris, and up with Beijing.

The face behind this broadcast is British news veteran Susan Osman, a former BBC presenter. She was hired amid much fanfare last year to anchor the Beijing Hour, news and public affairs show with a China focus.

“China is an emerging economy and it’s becoming more and more in the forefront of the world stage. And I have been in journalism for 30 years. And I thought it a bit unwise of me not to know what the Chinese perspective is,” says Osman.

Osman joins other American and British journalists now working for Chinese media. The show she hosts is one small piece of a huge global media strategy. The Chinese are creating TV networks, expanding English-language news services, and leasing radio stations from Latin America to Africa.

The Beijing Hour is not revolutionary. The day we listened, the news was straightforward, including the economic fall-out in Europe following that erupting volcano in Iceland, and Coca-Cola’s latest plans to expand in China.

“The use of propaganda is self-defeating because people in this market in the United States especially are more sophisticated than in rural parts of China,” said station owner Pendleton. “Here propaganda is easily seen, quickly identified and discounted.”

“For the world, this is a good thing. We have, when all is said and done, added one more voice,” adds Zhou Xiaopu, who is a journalism professor at Renmin University in Beijing.

She and other analysts say the Chinese have some problems to work out, but she is happy they have started the process.

Industry analysts say the Chinese plan to spend $6.6 billion on their global media campaign, banking on the concept that the stronger a nation’s media capacity, the greater its influence in the world.