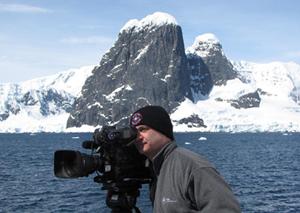 The Antarctica Challenge: A Global Warning, winner of seven international film awards, reports on the new discoveries made by the world’s scientific community stationed in Antarctica during International Polar Year.

It is the only film invited to both the International Polar Year Science Conference and the Polar CINEMA Film Festival. The conference will be attended by polar scientists and media the world over and the festival will be staged for the public at large. The screenings are being sponsored by myEARTH360.com.

“I am honoured to participate in this historic event,” said filmmaker Mark Terry. “The media will be quite surprised with the findings the world’s polar scientists are announcing at this conference.”

The film made headlines last year when it was the only one officially invited by the United Nations to screen to delegates and world leaders attending COP15, the Climate Change Conference in Copenhagen last December. With more than 25 screenings during the two-week conference, the film made an impact on the delegates with its message of Antarctica’s rapidly-changing environment.

“Of all the canaries in the climate coal mine, the polar regions and the mountain glaciers are singing the hardest and the loudest,” said Achim Steiner, UN Under-Secretary General and Executive Director of the United Nations Environment Programme. “Mark Terry’s new climate change documentary The Antarctica Challenge: A Global Warning underlines these realities with some of the latest and increasingly sobering scientific findings.”

The film, which was released on DVD by PBS on March 30, 2010, reports on diminishing populations of penguins and marine life, grass growing in the world’s largest desert, startling new data on the ozone hole and the imminent rise in the world’s sea level due to the accelerated melting of Antarctica’s land ice. View the trailer.

The film’s director, writer and producer Mark Terry is touring with the film to continue his mission of educating the world of these new environmental discoveries that will impact on all of us.

Documentary filmmaker Mark Terry has been producing award-winning films in Canada for more than 20 years. A Member International of The Explorers Club, Mark has travelled the world for his films, achieving the rare feat of setting foot on all seven continents.

Mark also produced and directed the documentary feature We Stand On Guard which chronicled the first 100 years of Canadian military service and saw Mark serve with the Royal Canadian Regiment in war-torn Kosovo.

Mark’s film career has taken him to the Painted Desert in Australia, the Sahara Desert in Egypt, Ecuador and Venezuela in South America, Hong Kong, Kowloon, Lantau Island and Macau in Asia and throughout Europe, North America and the Caribbean.

The mountain ranges Mark has climbed include the Rockies (Canada and the US), the Andes (Ecuador and Argentina), the Alps (Italy and Switzerland), the Carpathian Mountains (Romania) and the Sar Mountains (The Balkans).

But of all the destinations Mark has visited in the world, he is most fascinated by the polar regions. Having traveled to the Arctic here in North America several times, Mark has now completed a documentary on Antarctica focusing on studies made there during International Polar Year (March 2007 to March 2009).

Founded by Lynn Hasselberger, an environmentalist and mom concerned for her son’s health and future, myEARTH360.com offers eco-friendly products from the eco-practical to the eco-chic. The company’s mission is to help others transition to an earth-friendlier lifestyle. A portion of all sales is donated to the National Environmental Education Foundation (NEEF).

Lynn’s mission is to provide information and solutions to help others not only lead an earth-friendlier lifestyle, but take action for clean air, clean water and safe food. She is a contributing editor to a variety of online publications.