Painting Resurrected : Painting Rises From The Grave in NYC 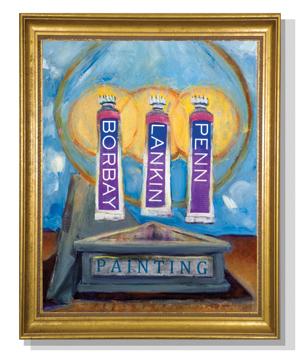 SUPERNATURAL EVENT: PAINTING RISES FROM THE GRAVE ON MAY 22, 2010

Many have glibly declared: “painting is dead.” Some have offered $10,000 for proof of expiration. On Saturday, May 22, 2010, contemporary artists BORBAY, Jeremy Penn and Ari Lankin offer evidence to the contrary. Opening for one-night-only in TriBeCa, “Painting Resurrected” will exhume eighteen contrasting paintings, supernaturally confirming – the demise of painting has been greatly exaggerated. Myths will be shattered, precedents will be set and cocktails will be served.

Admittance: Open to the public

Voted Time Out New York’s Most Creative New Yorker in 2009, Upper East Side artist BORBAY has painted famed landmarks around the world. On display will be BORBAY’s collage paintings, comprised of New York Post headlines and layer upon layer of acrylic paint. Driven to capture the actuality of society, this series visually displays the paradox of love, lust, murder, sex, sports, betrayal, triumph, religion, rape and politics in one place… concepts any person reading a daily newspaper will see juxtaposed without a second thought. His works have been acquired for private and corporate collections around the world.

Jeremy Penn was born in 1979 in New York and studied Fine Art at both the University of Maryland and Pratt Institute. Penn’s paintings are best known for using color to elicit an emotional response. His works have been exhibited internationally and have gained acclaim from curators at museums such as The Museum of Modern Art, New York and The Metropolitan Museum of Art, New York. In 2009, Penn was honored as the “Featured Artist” for New York’s first Freedom Week. In 2010, Penn’s art was awarded both ASFD’s Pinnacle Award and the ADEX Gold Medal. His works have been prized by notable collectors, including the Crown Prince of Dubai. Energized by the caprices of popular culture, Penn’s recent work explores the evolution of celebrity.

Ari Lankin was born in the suburbs of Philadelphia in 1980. He received his BFA in Painting and Economics from Brandeis University. Although a wide traveler and avid road tripper, it is Manhattan that has been his home and inspiration as an artist, fueling his investigative and intuitive approach to painting. His concerns with systems, dreams, chaos and order, realities, and relational flow can be read in his work. The flux of these influences affords multiple interpretations, and allow for both moments of recognition and uncertainty. Ultimately he is concerned with risk taking, wisdom, process and chance rather than emulating a preconceived final image.