Most original and unique solitaire card game in the App Store 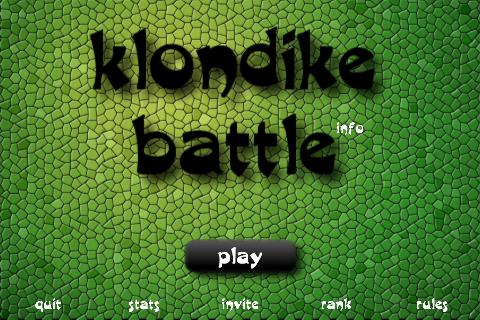 Of course there are lots of nice apps on the web, so the obvious question is why my app ‘Klondike Battle’ should be promoted in any kind of way?

First of all ‘Klondike Battle’ is unique in its kind
It’s the first patience game in the App Store you can play against the computer AI. This card game uses two desks of cards and the players share a common playing field. The game is based on the popular ‘Crapette’or ‘Russian Bank’ all over the world.

Secondly, users reviews until now are quite good!
The game is hard to grasp at first, but when you get hold of the game it seems very addicting. You can see the deeper layer and strategy of the game. I have several user emails telling the game is so much fun and timeless. It’s always different and challenging! About 10.000 people downloaded the game for free in the beginning and more than 70% still has the app on the iPhone.

Third and last I am trying to built an online Klondike Battle Community for people all over the world and it’s for FREE! At the homepage a free version is playable (and downloadable) for everyone. To build this community I need to spread the word and hope you will join!

Play for FREE at http://www.nifty-inspirations.com/

Detailed Game Description
First of all you play head-to-head against an opponent (human or computer) to determine who the best is! You are constantly trying to play your cards strategically onto the
playing field, which you share with your opponent. The smarter player can increase its winning chances, by carefully checking all possibilities and making the better moves. In the classic solitaire game, you challenge yourself, but in Klondike Battle you challenge your opponent.

Secondly the game Klondike Battle has a great game pace whilst you also play against the clock. Who makes better choices in the time given? Is it you? The time is literally ticking against you, while you try to solve the best possible move! No more waiting for slower players, it keeps the pace going!

And last but not least, you can pound your opponent mental state with cards you cannot play to the playing board and give yourself the advantage in the game! Your opponent will not appreciate this, resulting in hilarious sounds of annoyance.
This game is timeless and I think once you’ve mastered the game you will love it! Take your time, this game will stick with you through the years, I know it does!

Users opinions:
“..once learned, it’s really addictive…”
“A card game for the real persistent people that want to be challenged!”
“…difficult but challenging at the same time…”

Objective of the game
The objective is to lay down all your cards from your stacks to the playing field before your opponent does. This is achieved by strategically playing them to the foundations, tableaus or by loading them onto your opponent stacks. Use created empty spots wisely, they increase your chance of winning…

Read enough? Check it out now!