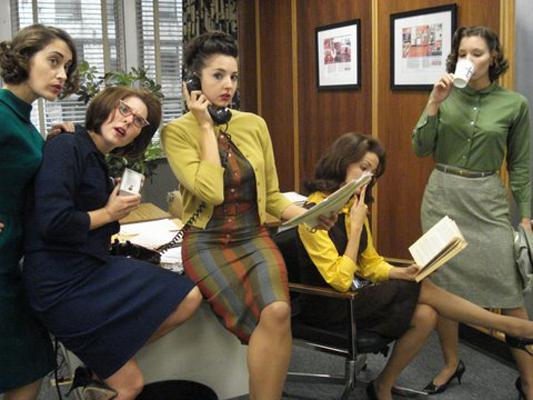 Actress/producer, Britt Hysen, goes ‘Behind The Scene’ in a new webisode that explores  the vast world of art and the professionals that bring it to life.

Finding the roles remarkably similar, 21 year old actress/blogger Britt Hysen, Mad Men’s youthful secretary Mary from the Sterling Cooper Agency, traded her 1959 IBM Model C typewriter for a sleek 12.2 megapixel digital camera and launched a Generation Y influenced webisode, Behind the Scene with Britt Hysen, from the conference floors of NATPE 2010 (National Association of TV Programming Executives) while in the presence of media icons Michael Eisner, Irwin Gotlieb, and David Zaslav . “I think she [Mary] would’ve done the same thing if it were her era,” Hysen said of her fictitious character. “Mary hand scribed dictation in the boardroom then processed her notes using a typewriter and a copier. I digitally captured the conference sessions then uploaded to the Internet. We’re not so different– we just use different technologies.”

As a business major in college, and the co-creator of an edgy TV episodic pilot, Hysen attended the annual TV programming conference with the intention of gaining fresh prospective on new media and its impending effect on the entertainment industry. It didn’t take long, however, for her to realize she was ahead of the pack when Keynote Speaker, David Zaslav, of Discovery Communications told the audience of digital content producers, “Youtube is where we draw our content.” Hysen laughed at the irony, “Talk about being in the right place at the right time. I don’t think David realized he was being videoed by a Millennial who was minutes away from uploading his advice to students across the nation!”  Fortunately, the CEO of Discovery Communications’ pep talk came at the beginning of the conference, and his words resonated deeply with the prodigy filmmaker.

Hysen’s NATPE 2010 adventure put her within feet of a long list of media powerhouses including NBC Chairman, Jeff Gaspin who answered tough questions about the Conan and Jay controversy; TV showrunners Bill Lawrence, Steve Levitan, Jonathan Prince, and David E. Kelley who were all willing to share their experiences; female webisode producers, Justine Bateman and Illeana Douglas who were among those making the transition into Internet content; and actor/director, Hugh Laurie, who had just wrapped his directorial debut on House, M.D. “I was fortunate to hear first hand from industry leaders, but even more excited to blog their professional advice to my Gen Y audience.” Hysen beamed, “Behind the Scene with Britt Hysen, is a serendipitous byproduct of that mission.”

Since attending NATPE 2010, Behind the Scene with Britt Hysen has highlighted a variety of professions within the art community including live event production, TV/Film editing, environmental art installation, music production, and collaborative art exhibition. “My show explores the world under the umbrella of art,” Hysen explained, “while proving you don’t need to be formally trained to earn a living doing what you love.” Future episodes include coverage of the Coachella Art & Music Festival, an indepth interview with showrunner, Jonathon Prince, and many celebrity interviews as the TV/Film award season begins.