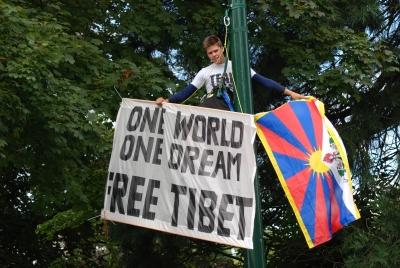 – In the aftermath of the earthquake in Tibet yesterday, Tibetans and their supporters will hold a candle light vigil in the Parkdale neighbourhood of Toronto , home to the largest Tibetan community in Canada .

WHAT:         Candle light vigil to commemorate the victims of the earthquake in Tibet .  Donations will also be collected to contribute to relief efforts.

WHO:          Tibetans and their supporters, organized by the Canadian Tibet Joint Action Committee

The devastating earthquake struck Kyegundo (spoken: Jyekundo) in Kham, eastern Tibet (Ch: Jieguduo or Yushu , Qinghai Province) at approximately 7:45am on April 14th, 2010. Media sources have reported nearly 600 people killed and 10,000 injured, while Tibetans with contacts in the area report the death toll may to be as high as 4,000. Reports that a dam in the region could burst have prompted people to flee into the surrounding mountains.

Tibetans living in exile are frantically trying to reach family members, however phone lines are down and many people are afraid to speak openly about the situation as the Chinese government monitors all phone calls and Internet communication.

The situation in Kyegundo has been tense since protests against Chinese rule broke out in 2008. In the aftermath of the countrywide uprising, the Chinese government flooded the region with troops. Although relief efforts are underway, it is difficult to assess the effectiveness of the Chinese government’s response given that international media are now barred from the earthquake zone.

There has been a major outpouring of grief and support for relief efforts by Tibetans and Tibet supporters worldwide. Along with Toronto , vigils and fundraising events are planned in cities around the world.

During the vigil, there will be a collection for donations to contribute to relief efforts.

Toronto is home to one of the largest exiled Tibetan communities in the world. The Canadian Tibetan Joint Action Committee is made up of the six major Tibet NGOs in Toronto .