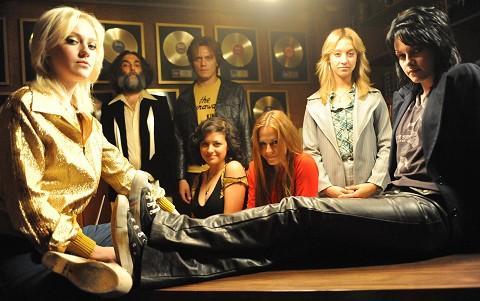 Girls Prove They Can Rock in ‘The Runaways’

They hit the music scene 35 years ago with a burst of teenaged energy and budding sexuality. Their story begins in 1974 outside a music club on Hollywood’s Sunset Strip when 16-year-old Joan Larkin adopted her stage name and screwed up her courage to approach legendary rock producer Kim Fowley.

Kristan Stewart stars as Joan Jett in “The Runaways”

That band, “The Runaways,” only stayed together about five years, but in that half decade proved the conventional wisdom in the music industry – that women could not rock – was wrong. Jett, executive producer of the film, says it gets most of the important details right.

“It’s a story that is based on a real band that existed,” she says. “It follows what ‘The Runaways’ did. There are a lot of real things in there, but there are embellishments. There are timeline shifts … more than anything, those little details are a little different, but nothing that makes it hard for me to watch at all.”

“Of course they had to take some liberties, but I think it’s pretty darned close,” says Cherie Currie who was barely 15 when she became lead singer of “The Runaways” and later wrote an autobiography – “Neon Angel: A Memoir of A Runaway” – with details of the band’s beginnings that became part of the movie:

“To me it’s just miraculous,” she says. “Wow, 35 years later and all the hell that we went through and for people to finally get that is really a gift. I still haven’t been able to wrap my brain around it. I’m very grateful.”

Dakota Fanning, who has grown up in front of movie audiences – she was barely seven years old when she co-starred with Sean Penn in “I Am Sam” in 2001 – plays the racy and sometimes reckless Cherie.

“One of the reasons I wanted to do this movie was to do something different than I’ve done before and to have people see me in a different way than just being in ‘I Am Sam’ and being younger,” she says. Certainly it was tough going to those places but, at the same time, the gritty parts and tough parts are the best parts and the parts I was most excited to do because that’s when Cherie is really raw and open and you see her vulnerability and her innocence that she still has even though she has been through some crazy times.”

For the role, Fanning had to learn to sing like a rock star; and Kristen Stewart, who portrays Joan Jett, also learned to play Jett’s in-your-face guitar licks.

Italian-born photographer and music video director Floria Sigismondi makes her feature film debut with “The Runaways” – both directing and writing the script; but she adds that to make it work, her stars had to work hard at recreating the raw energy of the original band.

“I had two weeks with Kristen; I knew she could play guitar and she was already practicing on her own,” she says. “She already had recorded a little bit so I knew that she would come in prepared. I had about a month with Dakota and I put her in front of a live band for many rehearsals. Then when everybody got together I did numerous rehearsals as a band. So by the time I was filming they had already bonded and already knew what it was like to be in a band. I felt really confident on that level and so did they. I think that was really important. By the time we got to ‘Cherry Bomb’ they really excelled. We had a month of shooting and by that time they were a band.”