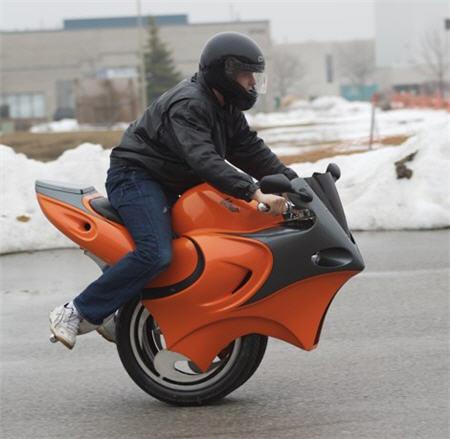 The Uno and its inventor, 18-year-old Ben J. Poss Gulak, hung out in a booth neighbouring the show’s special guest, Russell Mitchell of Exile Cycles and was the ultimate in contrast of custom creations. In fact, heavily tattooed Mitchell was seen riding the Uno around the show on Saturday evening.

Ben, as you would expect, fielded a multitude of questions about his strange vehicle once people got over his young age. As Ben will tell you, the most common question was, “What’s your background, how did you get into doing something like this?” A worthy question, and also my first question to Ben.

Ben grew up around his grand-father’s basement machine shop. While he doesn’t have any formal training, yet, Ben has spent much of his life making projects like ‘model trains, rockets and other cool stuff.’

The education he gleaned from his grandfather, who was an engineer, and from simply being a tinkerer prompted Ben to enter into a grade nine school science fair with a ‘real simple magnetic car that shot around a track using accelerator coils.’ This is where I started to worry that this guy is going to start speaking a language that is way over my head. He must have noticed my eyes starting to glaze over and came back to earth for me. He did well at the grade nine science fair, and as a result, he was chosen to move up to the Regionals, then to the Nationals. He was then chosen to represent Canada at an International level.

“Team Canada consists of 18 people that compete against 54 other countries. The judges at this level all carry PHD’s in their respective fields,” Ben said. The 18-year-old continued, “There were astronauts and Nobel laureates speaking to the kids in attendance. It was a real eye opener, and after the competition I realized I really wanted to get into engineering.”

About a month after the competition, Ben’s grandfather passed away and his machine shop was willed to Ben. He continued to compete in science fairs with progressively more complicated projects thanks to the increased knowledge he gained as every year of high school passed.

A 2006 trip to China prompted Ben to consider a project in electric transportation after seeing the damage done by the internal combustion engine. “The smog was so thick, we never saw the sun,” Ben said. He then realized that some form of electric transport was desperately needed in the same compact form as a motorcycle or bicycle to help ease congestion and save the environment.

Since Ben had competed at the International level of the science fair before, he was able to apply to Team Canada directly without going through the Regional and National levels of competition. It was this competition that he submitted his first Uno. A simple frame made from angle iron and mountain bike wheels, which were of course powered by electric motors.