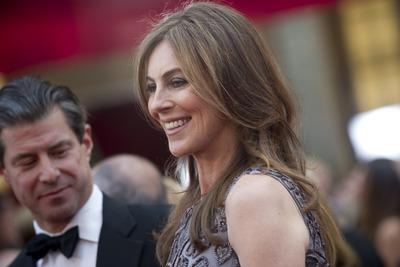 The Hurt Locker” director Kathryn Bigelow has won the Oscar for best director, become the first woman ever to achieve the top honor.Above, Bigelow arrives at the 82nd annual Academy Awards Nominee Luncheon at the Beverly Hilton Hotel in Beverly Hills, California on February 15, 2010.

“The Hurt Locker” director Kathryn Bigelow has won the Oscar for best director, becoming the first woman ever to achieve the top honor at the Academy Awards.

While her best best-known films were such fare as the vampire pic “Near Dark” and the Patrick Swayze surfing drama “Point Break,” the critically-acclaimed “The Hurt Locker” has put Bigelow into a different stratosphere.

She was the first woman to win the Directors Guild of America award for outstanding directorial achievement in motion pictures for “The Hurt Locker.” She also won the best director prize at the 2010 British Academy Film Awards.

She was nominated for a Golden Globe but ex-husband James Cameron took the prize for his 3D sci-fi epic “Avatar.”

Bigelow was the first female to win a BAFTA Award for best direction and fourth ever to be nominated for an Oscar after Lina Wertmüller for “Seven Beauties” in 1976, Jane Campion for “The Piano” in 1993 and Sofia Coppola for “Lost in Translation” in 2003.

“The Hurt Locker” follows a United States Army Explosive Ordnance Disposal (EOD) team during the Iraq War and stars Anthony Mackie, Brian Geraghty and best actor nominee Jeremy Renner. They star as members of a U.S. Army EOD unit in Iraq and the film tells of their tour together as they contend with defusing bombs and the threat of insurgency.

Bigelow shot in the Middle East, specifically in Jordan, within miles of the Iraq border.

I would not be standing here if it wasn’t for Mark Boal, who risked his life for the words on the page and wrote such a courageous screenplay that I was fortunate enough to have an extraordinary cast bring that screenplay to life. And Jeremy Renner, Anthony Mackie and Brian Geraghty. And, I think the secret to directing is collaborating and I had truly an extraordinary group of collaborators in my crew. Barry Ackroyd and Kalle Júlíusson and Bob Murawski, Chris Innis, Ray Beckett, Richard Stutsman and if I could just also thank my producing partners, Greg Shapiro, Nick Chartier and my wonderful agent, Brian Siberell, and the people of Jordan, who were, such a… so hospitable to us when we were shooting. And I’d just like to dedicate this to the women and men in the military who risk their lives on a daily basis in Iraq and Afghanistan and around the world. And may they come home safe. Thank you.