When the Olympics Happened, the World Turned to Yahoo!, the No. 1 Online Destination for Winter Olympics Coverage 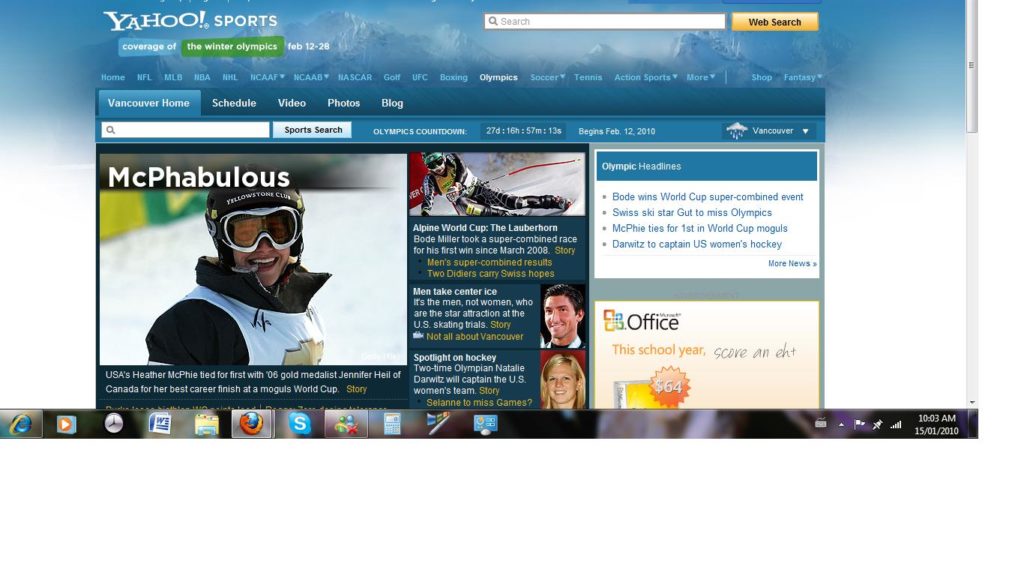 Yahoo! Sports Takes Gold, Beating NBCOlympics.com, ESPN and All Other Sites in Number of Unique Visitors and Time Spent

— Yahoo! Inc. (NASDAQ:YHOO) today released comScore audience figures showing that Yahoo! Sports was the No. 1 online destination in the US for Olympics coverage, beating out NBC and ESPN as the destination people turn to for the most relevant, timely, and comprehensive information about major sporting events.

“The 2010 Winter Olympics featured exciting competition, brilliant performances, spectacular blunders, compelling human interest stories and once again the world turned to Yahoo! for the most comprehensive and engaging coverage of the games,” said Jimmy Pitaro, vice president, Yahoo! Media. “We know what users want when they come to Yahoo!, and we delivered a cross-platform Winter Games experience that helped us turn in our own gold medal performance: record traffic, engagement and click-through rates.”

Yahoo!’s Searches During the Games

Audiences consistently looked to Yahoo! for up-to-the competition results, the most interesting stories and for answers to a wide range of questions about all aspects of the games. Below is a sampling of search highlights:

Once again, Yahoo!’s editors featured fascinating stories on the Yahoo! homepage from its industry-leading team of writers that really clicked with Olympic fans, including:

Yahoo! Olympic Offerings During the Games

Yahoo! also built a custom-designed broadcast studio in Vancouver, and an entertainment center, FanCouver, where more than 100,000 fans attending the games visited to participate in Yahoo! events and promotions.

Yahoo! Sports is no stranger to domination when covering the Olympics. During the 2008 Summer Olympics in Beijing, the site attracted the largest online audience for a sports destination, reaching more than 38.5 million people during the month of August 2008 and setting a then all-time audience high. Yahoo! Sports beat the closest competitor (NBC Sports) by a decisive 15 million unique visitors. During August 2008, one in five U.S. Internet users visited Yahoo! Sports, and Yahoo! News also set an all-time site record, reaching 44.3 million unique users. Combined, Yahoo! Sports and Yahoo! News reached 57.3 million users, nearly one-third of the entire Internet audience.

Yahoo! attracts hundreds of millions of users every month through its innovative technology and engaging content and services, making it one of the most visited Internet destinations and a world-class online media company. Yahoo!’s vision is to be the center of people’s online lives by delivering personally relevant, meaningful Internet experiences. Yahoo! is headquartered in Sunnyvale, California. For more information, visit pressroom.yahoo.com or the company’s blog, Yodel Anecdotal (yodel.yahoo.com).

Yahoo! is the trademark and/or registered trademark of Yahoo! Inc.