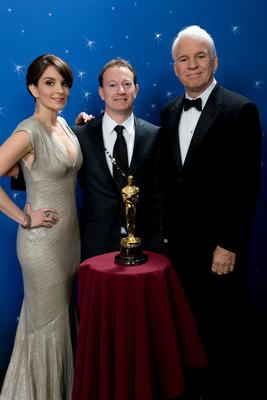 Baron Cohen, who is known for creating outlandish characters, came to national attention in 2003 on the HBO series “Da Ali G Show,” in which he played the title character. His film credits include “Talladega Nights: The Ballad of Ricky Bobby,” “Borat Cultural Learnings of America for Make Benefit Glorious Nation of Kazakhstan,” “Sweeney Todd The Barber of Fleet Street” and “Bruno.”

Bateman is in the Oscar-nominated film “Up in the Air” and is attached to several upcoming projects. His other film credits include “Juno,” “Forgetting Sarah Marshall,” “Hancock” and “State of Play.” He previously starred in the comedy cult hit “Arrested Development.”

Carell will be seen next in “Date Night” and recently completed work on “Despicable Me” and “Dinner for Schmucks.” His other film credits include “The 40 Year-Old Virgin,” “Evan Almighty,” “Dan in Real Life” and “Get Smart.”

Fey came to prominence as a regular on “Saturday Night Live” and currently stars in, produces and writes for “30 Rock.” She will be seen next opposite Carell in “Date Night.” Her other film credits include “Mean Girls” and “Baby Mama.”

Stiller recently completed work on “Meet the Fockers Sequel” and is attached to several projects. His film credits include “Empire of the Sun,” “Reality Bites,” “Flirting with Disaster,” “The Royal Tenenbaums,” “Meet the Fockers,” “Night at the Museum” and “Tropic Thunder.”