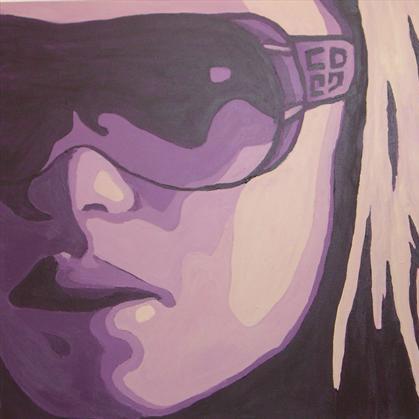 Art must be in Joanna Gilbert’s blood. The Indian born British artist is making her mark in the contemporary art world. Joanna uses digital technology to create hand painted works of art which once seen, are never forgotten. Her inspiration comes from Andy Warhol and Roy Lichtenstein as well as younger modern artists such as Kris Hardy. Her style, despite these influences, is very much her own.

Of Warhol she says” I love his work. I also take inspiration from Allison Leftcort – her work is very simple, yet edgy and she has lots of celebrity clients. I’m planning to follow in her footsteps.” Seeing and hearing her enthusiasm and determination, somehow you wouldn’t doubt it.

Joanna moved with her parents from India to leafy, suburban Kingston Upon Thames when she was two. Her schooling built character, since she was one of three Jewish children in her school and so she learned early to be individual and not part of the mainstream. Joanna then describes he move to North West London and this lead to her meeting the ‘man of her dreams’. Very much the modern working mother, Joanna balances her painting with looking after her two young children. As she puts it on her Twitter profile, she likes to juggle life around her painting. But it is art and painting that is in her soul.

Having gained a BA Hons degree in Retail Marketing at Manchester Metropolitan  University in 2000, Joanna began her career in the commercial marketing of major brands such as Orange, Discovery Channel & Puma, working on everything from Point of Sale, Direct Marketing to Advertising.

After furthering her qualifications to include Graphic Design and Photography she began painting again in 2005, combining the simplicity of graphics with the personality of brushstrokes.

During her abstract phase, Joanna began experimenting with different collections of mixed media on canvas including the use of rich metallic’s, gold leaf and various mediums to create 3-Dimensional exciting, thought provoking pieces of art, which have been commissioned for both residential and commercial properties.

Gilbert then moved onto portraits in 2007 as the demand for requests grew.  She states, “There are always going to be fine artists who can create paintings like they are photographs, I like to turn photographs into paintings and add a little pop!”

Her friend, Mike Maslen, encouraged Joanna to develop her talent. She says he has been her” friend, adviser and kick – starter” and inspired her to take the plunge into a full time contemporary art career.

e gone from strength to strength.

Her work has included commercial commissions for:

Westfield Centre, London – House of Fraser flagship store which was opened by Sophie Ellis-Bextor in November 2009.

She has also undertaken private commissions, including work for Alan Rubenstein (MD for Jewish Chronicle) and Richard Ferrer (MD of Jewish News).

Most of Joanna’s work has come from word of mouth referral. Her most recent painting, entitled ‘Painting Peace’ depicts an Israeli Soldier praying by the Western Wall. It was a topical piece and very much about now. It is a very modern image with a strong message.

Each painting takes between ten to fifteen hours to paint and is worked from digitally enhanced photography. Joanna likes to work big and feels that the bigger the canvas the better for her. The images are strong and colourful and one cannot help but notice them.

The concept of this painting has led her to the idea for her new collection.  Joanna is working on a collection about now. “I’m trying to reflect to the diversity of our lives now, in this generation in building a collection which will reflect what we think about what is happening now”.

The collection will go on show in September and will contain contemporary portraits of celebrities from now, as well as topical paintings reflecting to the diversity of our lives right now in this generation and where we are at.

Joanna’ s work makes a fantastic gift and each piece is unique. They make an ideal gift or addition to any room. If you email her a photo or an idea, she will work on concepts for you, no obligation.