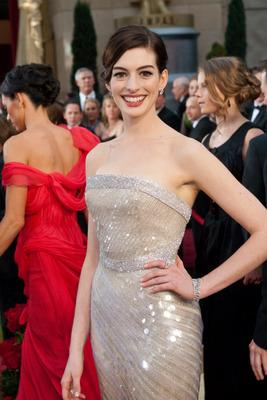 — The Academy of Motion Picture Arts and Sciences is inviting the public to vote on an element of its annual Oscar® telecast. In “Oscars Designer Challenge 2010,” nine up-and-coming fashion designers are vying to have their original evening gown worn by one of the Awards escorts during the 82nd Academy Awards on Sunday, March 7. Members of the fashion and entertainment press were introduced today (2/23) to the nine designers and their creations at a runway fashion show at the Academy’s Beverly Hills headquarters.

Oscar fashion coordinator Patty Fox and an advisory committee selected the designers and paired them with Los Angeles-based models, one of whom will wear the public’s favorite gown as she brings Oscar statuettes onto the stage of the Kodak Theatre on Oscar Night®.

Public voting for “Oscars Designer Challenge 2010” begins today at 5 p.m. PT at Oscar.com, the official Web site of the Academy Awards, where movie fans and fashion lovers will be able to see footage of the gowns and cast their vote. Anyone over the age of 18 can register to participate and will be eligible to vote once a day through 11:59 p.m. PT on March 1, 2010, when the voting period ends.

Beginning March 3, “Oscars Designer Challenge: Behind the Dress,” a Web series documenting the competition will be viewable on Oscar.com daily through March 8, 2010.

The winning design will be announced first during “Oscars Red Carpet… 2010,” the live arrivals show that will air on ABC beginning at 5 p.m. PT on March 7.

In addition to having his or her winning design worn on the live telecast, the winning designer will receive two tickets to attend the Oscars ceremony.

A team of expert hairstylists and makeup artists from Roy Teeluck Salon prepared the models for their high-fashion stroll down the runway, and diamonds courtesy of Martin Katz provided additional glamour for today’s show.