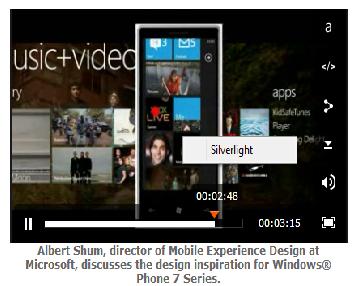 — Few segments of the technology industry have changed as dramatically in recent years as mobile phones. Far beyond texting and talking, today’s phones provide a palm-sized mobile office, entertainment center and communications hub.

Along with the striking evolution of mobile technology, Senior Vice President Andy Lees of Microsoft’s Mobile Communications Business says the most important part of the market for mobile phones is the people who use them.

“There is a unique relationship between people and their phones,” Lees says. “It’s the one piece of technology they have with them all the time, keeping them connected to information, family, friends and coworkers. The journey we’re starting now is about helping people connect with their mobile lives in a fresh, new way

Lees is unveiling Microsoft’s new mobile platform this week — Windows Phone 7 Series. Partners have already started building the new Windows Phones, the first of which are expected in the market by the 2010 holiday season.

With the launch this week, Lees views Microsoft’s presence in the space in a very different light. The platform, he says, is so new and different that “in many respects we are basically a new entrant into the market for these powerful phones.”

Lees says Microsoft went back to the drawing board on everything from raw materials, to how the company works with phone partners, to a complete redesign of the operating system. More than a new user interface, Lees says, with Windows Phone 7 Series, Microsoft has evolved its entire offering to take full advantage of converging technologies, emerging online services and the opportunity they provide to give people everything they want from their mobile phone.

“We made a very big decision to re-examine everything, because the industries surrounding mobile are at an inflection point,” Lees says. “The technological advances over the past few years enable us to do bold new things we’ve never done before. But the most important thing is that we are bringing it all together with an almost maniacal focus on the consumer.”

The new Windows Phones include Xbox LIVE games and Zune music and video for the first time on a mobile phone. A special implementation of Bing Search offers intent-specific results. And built-in functionality for photography can automatically synchronize photos to PCs and photo storage on the Internet, eliminating the common hassle of getting pictures off of a phone. Microsoft Office productivity software and other personal productivity features are also tightly integrated.

“With all of that, we couldn’t be announcing more change than what we’re doing,” Lees says. “The reason we took such care with this release is we’re setting up for the long term. We’re excited about Windows Phone 7 Series, but we’re even more excited about the long-term vision and what that’s going to mean to consumers.”

At the core of Microsoft’s new mobile experience is what Lees and his team call “life in motion” — where events are happening all of the time, just like life, and the phone keeps pace.

For example, there are “live tiles” on the Start screen — dynamically updated icons that show users real-time content from their contacts, applications, services and other items, says Lees.

“Your friends’ status updates are shown,” he says. “If you have a calendar appointment, you see what it is and where you’re going. If you’ve got new music or have been invited to play a game, that information appears. And none of this intrudes on what you’re already doing.”

Live tiles act as a doorway into more detailed pages called “hubs” that connect to Web services, applications, contacts and other items. The live tile displays a synopsis of what’s happening, and tapping a live tile takes the user to the hub where more information is available and the user has the ability to act on it. Windows Phone 7 Series includes live tiles for contacts, games, calendars, calls and more, and independent software vendors (ISVs) can add their own live tiles for users to customize. Hubs bring together related content from the Web, applications and services into a single view to simplify common tasks.

“It’s all done in a very simple interface with beautiful graphics,” says Lees. “The flow of how you use it is really quite different from anything that’s been done before.”

Lees says a core concept for the design has to do with building a broad platform of software that works across whatever device each user is on at any given moment.

“We provide software in the cloud and on the PC to make all of that happen,” he says. “With music, we synchronize it automatically. With Xbox LIVE if you want to play with your friends, we make that super easy, even though they’re on a PC and you’re on a phone. These things all work in an integrated way across screens, so the phone supports your digital life much more completely.”

A New Way of Working With the Mobile Industry

Although the entire platform was designed to help people get what they want from their phones, Lees says the consistent experience wouldn’t be possible without significant changes in how Microsoft engages the broader community of mobile app developers, phone makers and operators.

“We’ve worked hard to improve how we work with phone makers to achieve a better end-user experience across both software and hardware,” Lees says. “Importantly, we’ve jointly defined a set of common hardware specifications across Windows Phone 7 Series. This will bring innovation in software and hardware together, to deliver a new wave of better and more consistent experiences for our customers.”

It’s an approach modeled after the way Microsoft works with partners in the PC space, Lees says, where harmony between hardware and software specifications stimulates innovation, because when software developers invest in a new application, they can do so with the knowledge that their creation will work across the PC platform. Hardware manufacturers also benefit because they are able to build their devices with confidence that they will work with a range of software.

“We’re creating that same environment in the mobile space,” he says, “So phone makers, ISVs and mobile operators can innovate. We want innovation without fragmentation. We want a balance that strikes harmony where hardware, software and services can work together in a much richer way. And we’ve put those pieces together in Windows Phone 7 Series.”