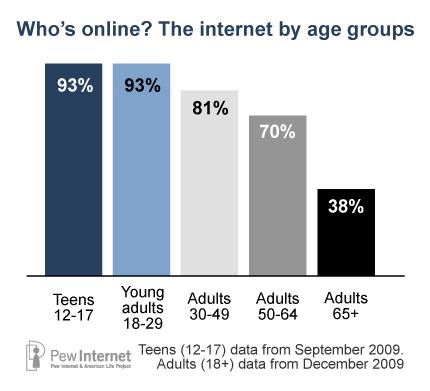 Since 2006, blogging has dropped among teens and young adults while simultaneously rising among older adults. As the tools and technology embedded in social networking sites change, and use of the sites continues to grow, youth may be exchanging ‘macro-blogging’ for microblogging with status updates.

Blogging has declined in popularity among both teens and young adults since 2006. Blog commenting has also dropped among teens.

While blogging among adults as a whole has remained steady, the prevalence of blogging within specific age groups has changed dramatically in recent years. Specifically, a sharp decline in blogging by young adults has been tempered by a corresponding increase in blogging among older adults.

Teens are not using Twitter in large numbers. While teens are bigger users of almost all other online applications, Twitter is an exception.

Wireless internet use rates are especially high among young adults, and the laptop has replaced the desktop as the computer of choice among those under thirty.

Internet use is near-ubiquitous among teens and young adults. In the last decade, the young adult internet population has remained the most likely to go online.

Our survey of teens also tracked some core internet activities by those ages 12-17 and found: