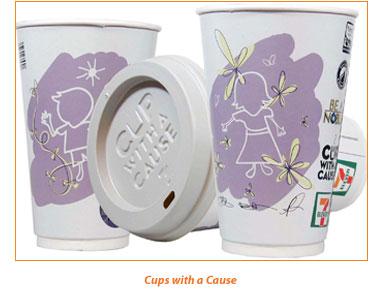 – Many cups will runneth over as 7-Eleven, Inc. aims to donate more than $2 million to charities via “7-Eleven® Coffee Cup With A Cause.”

Because nurturing good community relations is important to 7-Eleven and its franchisees, the company is launching a charity-focused coffee campaign this month. Throughout 2010, 7-Eleven® will introduce limited-edition 20-oz coffee cups designed by entertainment and sports celebrities to be sold in 7-Eleven stores nationwide. Proceeds from cups sold will benefit the featured celebrity’s charity of choice. Cups can be filled with any 7-Eleven hot beverage including coffee, tea or hot chocolate.

“Cup With A Cause is one of our most exciting programs,” says Rita Bargerhuff, 7-Eleven’s chief marketing officer. “We’ve turned our coffee cups into canvasses, and celebrities are creating artwork for our program that allows customers to directly support charities and causes that make dramatic changes to so many people’s lives.”

Nicole Richie, Joel Madden and Benji Madden will kick off the program. Proceeds from their cup, featuring a custom-designed drawing representing their cause, will support The Richie-Madden Children’s Foundation. The stars will join 7-Eleven representatives in early February, at a Beyond Shelter Neighborhood Resource Center in South Central Los Angeles to formally announce their partnership and cut the ribbon for the facility’s new playground for young children.

“7-Eleven’s ‘Coffee Cup with a Cause’ program and its donation to The Richie-Madden Children’s Foundation will help us provide a wonderful and safe atmosphere for children and their families at the new Beyond Shelter playground,” said Nicole Richie.

While 7-Eleven is providing a guaranteed $250,000 minimum donation to each charity, donations could reach as high as $300,000, depending on the number of cups sold. Consumers can drive donations through the purchase of these celebrity-designed cups.

7-Eleven’s Coffee Cup With a Cause program was first introduced at the 2009 NOBLE AWARDS, where Joel Madden was honored for his work with The Art of Elysium. The NOBLE AWARDS is a celebration that honors charities, celebrities and the tremendous work that they do. For more information about THE NOBLE AWARDS, please visit http://thenobleawards.org.

The Richie-Madden Children’s Foundation custom cups are available while supplies last at 7-Eleven, Inc.’s franchised and company-operated stores across the U.S. For more information about this program, please visit:
www.cupwithacause.org, www.facebook.com/7Eleven and www.twitter.com/7Eleven.

About 7 Eleven, Inc.
7 Eleven, Inc. is the premier name and largest chain in the convenience retailing industry. Based in Dallas, Texas, 7-Eleven operates franchises or licenses more than 8,100 7-Eleven® stores in North America. Globally, 7-Eleven operates franchises or licenses close to 37,500 stores in 16 countries. During 2008, 7-Eleven stores worldwide generated total sales of more than $53.7 billion. 7-Eleven has been honored by a number of companies and organizations recently. Accolades include: #3 spot on Entrepreneur magazine’s Franchise 500 list for 2009, #3 in Forbes magazine’s Top 20 Franchises to Start, #3 among Top 100 Global Franchises by Franchise Direct, #3 in Store Growth by Convenience Store News, #2 in Franchise Times Top 200 Franchise Companies and #29 among Top 100 Chains in Food Service. In addition, Hispanic Magazine’s named 7-Eleven in its Hispanic Corporate Top 100 Companies that provide the most opportunities to Hispanics. 7-Eleven recently was selected by three diversity publications as a company offering the best career and franchisee opportunities. 7-Eleven is franchising its stores in the U.S., and is expanding through organic growth, acquisitions and its Business Conversion Program. Find out more online at www.7-Eleven.com.

About the Noble Humanitarian Awards
The Noble Humanitarian Awards are produced on behalf of the Celebrity Charity Awards Corporation, a 501(c)3 non-profit organization. With the staging of the first annual awards on October 18, 2009, the Celebrity Charity Awards Corporation will launch a year-round campaign to better unify the efforts of charities with celebrities, influencers, media and everyday citizens in order to create an effective forum for change and service. For more information, please visit www.thenobleawards.org