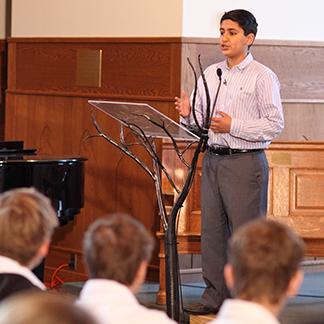 15
SHARES
ShareTweetShareShare
Bilaal Rajan, grade 9 student at Lakefield college school, UNICEF Canada’s Ambassador, youth activist, best-selling author and fundraiser is issuing a challenge to each student throughout the country to raise a minimum of $100 for the relief efforts in Haiti.

“Hundreds of thousands have died, and millions are without shelter, food, running water or medical attention.  Young Canadians have to get involved and help,” says Rajan, the fundraising wunderkind who has raised millions of dollars for programs that help children in need all over the world.  “I think the potential students have for raising millions of dollars is overwhelming.”

Barely a teenager, the Toronto-based children’s activist is already a force to be reckoned with.  An accomplished writer, Rajan’s book, Making Change: Tips from an Underage Overachiever (160 pages, Orca Book Publishers), shows people how they can take charge and make a difference in their communities, no matter what their age. In this YouTube video, he talks about  his personal challenge to fellow students to help Haiti http://bit.ly/8JVWGv

Rajan is adding an extra incentive for students to raise money.  The school that raises the highest amount will hold a public event where students will shave his head.  “I’m looking forward to see what kinds of fundraising ideas young people come up with and how much money they can raise.  Am I looking forward to going bald?  Not so much.  I hope the students are gentle,” he laughs.

At 4, Rajan began his fundraising success by selling clementine oranges door-to-door raising money for victims of the 2001 earthquake in Gujarat, India.  At 7, he founded Making Change Now, an organization dedicated to heightening awareness of youth issues and raising funds for children in the developing world.  In March 2005, he was chosen as an official Children’s Ambassador for UNICEF Canada.

All the proceeds raised by Rajan’s Haiti Challenge will go to UNICEF and the organization’s relief efforts in Haiti.  “The challenges of the Haitian people won’t go away overnight,” he says.  “But I know that students throughout Canada will step up to the plate and make every effort to help those who are suffering in the country.”

Bilaal Rajan is available for media interviews, live or by phone.